AN INTERVIEW WITH ALBERT PYUN (PART 1 OF 2)

Albert Pyun is a filmmaking legend in the arena of low-budget genre and action movies, with credits like THE SWORD AND THE SORCERER (1982), RADIOACTIVE DREAMS (1985), CYBORG (1989), CAPTAIN AMERICA (1990), KICKBOXER 2 (1991), NEMESIS (1992), MEAN GUNS (1997) and TICKER (2001) behind him. Pyun has time and time again exhibited a gift for making the most out of his limited budgets to bring imaginative, vividly realised, edgy tales to the screen. Despite serious health issues (he was recently diagnosed with early onset dementia), Pyun continues to bring his unique visions to the screen, with films such as ROAD TO HELL (2008), THE INTERROGATION OF CHERYL COOPER (2014) and his latest, INTERSTELLAR CIVIL WAR (2017). In the first part of a two-part interview I talked to Pyun about his early film viewing and filmmaking experiences; the influence of his time in Hawaii on his films; interning with Toshiro Mifune; adapting his vision for low budgets; his love of mixing tones and genres; working for Cannon and Charles Band; his experiences working with big actors; his love of Captain America and his opinions on the DC and Marvel superhero movies; and his unmade projects Total Recall, Masters of the Universe 2 and Spider-Man.

Growing up, what were some of the formative films for you?
The James Bond films were the first films I remember. I also liked musicals like BYE BYE BIRDIE (1963), and the Clint Eastwood Westerns. When I was in Japan I liked the chinbara films, films like SEVEN SAMURAI (1954).

What were some of your first short films?
Once I saw the first James Bond film, DR. NO (1962), I kept trying to make spy movies. I borrowed my Dad's 8mm camera and I would make a film or two a week, from when I was 10 years old on.

How did your time growing up in Hawaii influence your filmmaking style?
Hawaii was interesting in that the movies we got were a mixture of cinema from Japan and Europe and also American films. Toho, the Japanese movie studio, had a theater in Honolulu that was designed like an old temple. Kokusai also had a movie theater. I was very heavily influenced by Asian movies.

How did you manage to get an internship with Toshiro Mifune?
He saw one of my short films and he wrote me a letter saying ''It's a tough business but you should stick to it. '' After that, he invited me to be an intern on DERSU UZULA (1975), the Kurosawa film that he was originally going to be in. He didn't do the film in the end because he decided he didn't want to be in Siberia for a year. He knew what to expect with Kurosawa. He was doing his own TV shows and I basically went to work on those.

That must have been a mindblowing experience.

It was! I grew up watching his films, and both my Mom and Dad too. It was thrilling. Mifune was the nicest man. The last time I saw him was in 1992, when I tried to get him to be in a film I was doing called NEMESIS (1992). He didn't want to do any more English language movies because he felt too uncomfortable doing them.

What were the most important things you learned from working under Kurosawa's cinematographer, Takao Saito?
He gave me a sense of the frame. He taught me that you have a canvas and it's like a window that the audience is looking through. You control what they see. Until then I had never realised all these planes of existence. He showed me to how to look through the lens and tell a story on many different levels. He also taught me the importance of color.

What were the lessons you learned directing commercials in Honolulu?
I learned how to work fast, and add as much production value as I could. I never had any big budgets so I learned how to be resourceful. I used to use all the equipment from my commercials on my own short films. I would do the commercials in the day and shoot my own films at night.

What was the push that made you leave for L.A. to pursue a career as a director?
It was mainly because all of the labs and the high-end editing facilities were in L.A. I knew that if I wanted to make a feature film, which was what I wanted to do, I would have to go to L.A. I made a couple of visits, and luckily it worked out, and I got to start making films.

What was the inspiration for THE SWORD AND THE SORCERER?
It was really influenced by the films I had seen in Japan when I was in the second grade. I would go down to Shibuya and watch historical costume dramas and fairytales. I really enjoyed watching them so I brought those elements into THE SWORD AND THE SORCERER, along with stuff like the Lone Wolf and Baby Cart series.

The film was extremely imaginative. How did you respond to the challenge to fulfill your vision on a lower budget?
I had done a lot of commercials, so I had some experience in how to make cheap compromises that looked good. I knew that if I threw as many ideas up on screen in each shot as I could, some of them would come through.

Where did your love of mixing genres and elements come from?

I think it comes from the way I grew up watching movies. My Dad would take me down to a Toho cinema one weekend and we would see a Japanese film, and then the next weekend maybe we would see something like 2001 (1968). At that time, there was a lot of remarkable filmmaking going on – stuff like THE FRENCH CONNECTION (1971) and BULLITT (1968) – and there was something I liked about every film I saw. I learned from working with Toshiro Mifune and Takao Saito that each element you photographed was important. I wanted to bring as many ideas as I could to every film that I did. It would elevate the material, and make sure the whole was more than the sum total of the budget.

You became known for post-apocalyptic movies, but you have said that you don't have a special interest in doing them. What genres and kind of stories do you feel you are most passionate about and comfortable doing?
It's more about ideas. If I get an idea, it determines the genre. I don't stay in certain genres because I have a special interest in them. But I did stay in certain genres because those genres were more cost-effective and I could make a film look really good with the money and time that I had.

When writing your screenplays what do you usually begin with? The setting? The opening? A particular scene?
I usually have an idea of something I'd like to see or try to do, and then I build a story around that.

How do you feel about the criticisms that your films are excessively violent?
Well, a lot of my fans feel that my films aren't violent enough! I did a film called MEAN GUNS that was really violent but there was no blood. I try to only use violence if it's useful in eliciting a feeling from the audience. I don't think I do gratuituous violence. I try to stay truthful to the worlds I create.

Why didn't your version of TOTAL RECALL happen?
I think nobody could see that it could be a commercial film. Ronald Shusett, the screenwriter, was very faithful to the Philip K. Dick story, and his script was more cerebral than the film that was made with Arnold Schwarzenegger, which was far more of an action film. At the time I was involved, William Hurt was going to be the star. We had a meeting with the Head of Universal and he was just nasty the whole time. He didn't respect the project or the script and certainly not the producer, Dino De Laurentiis. It just looked like it wasn't going to fly. 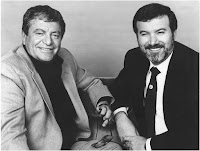 What did you love the most about working for Cannon? What were Golan and Globus like as producers?
Except for the fact that they had no money, they were great. They understood that we had to be very inventive and be given a lot of latitude in how we brought things to the screen. So long as we stayed on budget and on schedule, they gave you a lot of freedom. They had a whole lot of movies go over budget and not make a lot of money, and that is what killed them. They needed a lot of cash to keep going and so they were constantly making movies, which was how I got to make so many films with them.

What attracted you the most to the character of Captain America?
I had read the character as a kid and loved him. I was always intrigued by the idea that Rogers never saw himself as a hero. All he was trying to do was participate in the War and help America out. The script that we had was primarily based around those ideas. We really got hammered on the budget. We ended up getting only a third of what we needed.

Do you enjoy the current Marvel and DC movies?
For the amount of money and resources that they have, I am disappointed with them. WONDER WOMAN (2017) and LOGAN (2017) were really good though. They have changed the Marvel characters so much from the versions I grew up with in the 60s that it is really hard to relate to them. They're almost like toy figures.

I love the fact that after Masters of the Universe and Spiderman were cancelled, you re-used all the set and costume designs for CYBORG.
What had happened was that we had spent a lot of money on the prep of those two films, but Cannon reached a point where they couldn't make rights payments to Mattel and Marvel. I felt it was criminal that we had spent all this money on two films that couldn't be made so I came up with the idea of ''Let's take what we've built and go make another movie, so we can at least get that money back. '' Golan and Globus really liked that idea!