AN INTERVIEW WITH ALBERT PYUN (PART 2 OF 2)

Albert Pyun is a filmmaking legend in the arena of low-budget genre and action movies, with credits like THE SWORD AND THE SORCERER (1982), RADIOACTIVE DREAMS (1985), CYBORG (1989), CAPTAIN AMERICA (1990), KICKBOXER 2 (1991), NEMESIS (1992), MEAN GUNS (1997) and TICKER (2001) behind him. Pyun has time and time again exhibited a gift for making the most out of his limited budgets to bring imaginative, vividly realised, edgy tales to the screen. Despite serious health issues (he was recently diagnosed with early onset dementia), Pyun continues to bring his unique visions to the screen, with films such as ROAD TO HELL (2008), THE INTERROGATION OF CHERYL COOPER (2014) and his latest, INTERSTELLAR CIVIL WAR (2017). In the final part of a two-part interview I talked to Pyun about working with Jean-Claude Van Damme and other big actors; the difficulties of making his later films; his reputation amongst some critics as a modern Ed Wood; making ROAD TO HELL (2008), his unofficial sequel to STREETS OF FIRE (1984), the one-shot horror film INVASION (2005) and his latest film, INTERSTELLAR CIVIL WAR; and how his health issues have impacted upon his filmmaking.

How was working with Jean-Claude Van Damme on the CYBORG shoot?
Right from the start I could tell Jean-Claude was going to be a handful. He had been in the business long enough to get some pretty big wounds. I think he felt disrespected. I didn't have any major problems with him, other than how long it took him to get to the set.

Have your experiences working with bigger stars like Burt Reynolds, Christopher Lambert, Dennis Hopper and Steven Seagal been different from working with smaller stars?
Pretty much, no. The ones you mentioned were all great. They all knew the business well enough that they were easy to deal with and they could go with the flow of a pretty patchwork-budgeted film. I liked working with them because of their experience. They all wanted to do their best because they wanted to look good.

What are your favorite memories of working with Charles Band?
I didn't like working with him so much. At the time, his wife Debbie Dion was the one that held all the glue together. I don't think he cared about the films he was making, only what he could make off of them.

From the 2000s you have had to work much harder to get films made, moving into self-financing and outsourcing. But has it also been energising in other ways?
I was a lot less willing to compromise on the elements of the films. After TICKER I got final cut on all my films, and so I have gotten more pleasure out of making them than on any of my other movies. Before that there was a period where twelve films were taken away from me. These companies would send me out to shoot on very small budgets because they knew I could deliver a film that looked good, but then they would re-edit the films the way they wanted to. I objected, but I didn't have any clout.

Many fans and critics marvel at your imagination, work rate, resourcefulness and the quality of your films, but some critics have described you as a modern Ed Wood. How do you react to such a label?
I never saw that as a negative thing because Ed Wood as a filmmaker is thought of fondly. I consider him as someone who was ultra passionate in getting a movie up on the screen in spite of all the challenges that he faced. Now I have an even bigger challenge but it is still somehow very satisfying to somehow get a movie made. 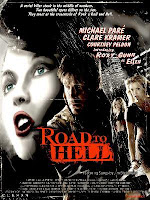 One of your most intriguing films is ROAD TO HELL, your unofficial sequel to Walter Hill's STREETS OF FIRE. How did such an idea come about?
I originally saw STREETS OF FIRE at a private screening at Universal in 1984, while I was editing RADIOACTIVE DREAMS. I was blown away by the movie and it stayed with me for years. I owned every format that came out. I got to know Michael Pare and we would talk about how we should get together and do a movie one day. I had cast his co-star in STREETS OF FIRE, Deborah Van Valkenburgh, in a couple of things. It all seemed to come together in 2008 and I was able to make ROAD TO HELL.

Did you have any interaction with Walter Hill about the movie?
No, but we did have to get involved with Universal because we re-licenced some of the songs from STREETS OF FIRE.

The film has characters learning to face their pasts and move on, and ends optimistically. How much of a personal film was this for you?
The film was germinating in my brain for so many years, and when I finally got to do it, I was able to take my time editing it without any outside interference. I kept experimenting with it to find ways to get everything that I wanted in there. I really wanted it to be a movie about Cody (Michael Pare)'s soul.

What inspired you to make the horror film INVASION, which is shot in one long continuous take? Do you enjoy setting yourself challenges like this?
Yes, I do. That was a wonderful concept that I just wanted to see if I could make work. We shot it in one night. Technically, HD was starting to become very big and I thought HD would enable us to do achieve what we wanted to achieve.

You retired from filmmaking after becoming very ill. What prompted you to return?
Once I determined I had early onset dementia I decided if I was going to go down, I was going to go down making a movie. I wanted my last breath to be about making movies before I gave in to this disease. The disease definitely makes it harder for me to make movies. It's a real challenge.

Has it been therapeutic for you?
It really has. It has kept my mind more active all the time, and purposeful. It's really rewarding, especially when you meet some of the new generation of filmmakers. HD technology makes it easier for someone like me in my situation. Without this technology I wouldn't be able to make films.

You are very open with your fans on social media about your health issues and your struggles to get films made. Has interacting with your fans been a positive influence on your life?
Yes, it's been a very positive influence. For most of my career I was kind of divorced from the audience. A lot of them were re-edited without my input and some of them would be out and I wouldn't even know it. Knowing the kind of audience that is going to watch my movies makes the movies more important and more personal to me now. A lot of people have parents or grandparents who are going through what I'm going through, and I just want to show them that there are ways you can keep working, keep your mind active and not give in to the disease. There are solutions to living a full life.

Do you feel that there are no limits to what can be achieved in filmmaking?
Yes, I definitely do.

How was the experience of making INSTERSTELLAR CIVIL WAR? What can audiences expect from the movie?
When I was making the film I was going through the initial treatment for the disease and I was just beginning to learn what it was doing to me. It was really shocking. For example, sometimes I would go blind, and tomorrow I won't even remember having talked to you. So, making INTERSTELLAR CIVIL WAR I was always faced with learning new aspects of the disease, and how limiting and insidious the disease is. But making the film was a pleasure because I had such a great cast and crew, and I think the film came out even better than if I had made it with a bigger budget. Because of my condition I was able to distill down what I wanted to say with the film and not have any outside concerns. I am at the point now where I don't have to worry about my career or whether a film will make money. The only thing I cared about was what I wanted to communicate with the film. That was my only responsibility that I had to live up to. It was a very liberating film to make, even though it took two years.

What advice would you give to young filmmakers who are struggling to make it through?
You have to commit to the ideas that you want to see on the screen and do everything that you can to persevere. That's really the secret to why I had such a long career and made so many movies. I persevered, no matter what. I didn't bitch and moan, or roll up and die. I just went on to the next film. The goal is to keep refining your ideas, to become more efficient and better prepared, so that if they do take your film away from you, there's not much leeway for them to change your vision. They just fired the two young directors from the new Han Solo movie, and that situation is my career in a nutshell.

INTERSTELLAR CIVIL WAR will premiere at the Horror Hound Weekend in September 2017.