AN INTERVIEW WITH BRIAN JAMIESON (PART 3 OF 3)

Brian Jamieson is alongside Nick Redman the co-founder of the boutique Blu-ray label Twilight Time, which produces limited-edition runs of new to the format studio pictures, both popular and not well-known. Prior to Twilight Time, Jamieson was a highly successful studio executive with Warner Bros. in his native country of New Zealand, and in England and Los Angeles, forging successful creative relationships with the likes of William Friedkin, Fred Zinnemann and especially Stanley Kubrick. Following his first year with Warners in 1977 and the sucess of his campaigns for THE DEEP and CLOSE ENCOUNTERS OF THE THIRD KIND, he was named International Publicist of the Year. As a preservationist, Jamieson was involved in the restored releases of films such as GIANT (1956),  THE WILD BUNCH (1969) and THE BIG RED ONE (1980), and he produced many in-depth documentaries and featurettes for Warners' home video releases of their classic films. He produced the documentary CANNES ALL ACCESS in 2007, and directed a documentary on Nancy Kwan, the star of THE WORLD OF SUZIE WONG, entitled TO WHOM IT MAY CONCERN: KA SHEN'S JOURNEY (2009). In the final part of a three-part interview, I spoke to Jamieson about Twilight Time, his Nancy Kwan documentary TO WHOM IT MAY CONCERN, and his passion for film.

What are some of the challenges of running the Twilight Time label?
We don't have a huge budget for advertising. Our marketing is mainly on social media, which Nick works very hard on. We have seen our numbers on Facebook rapidly increase. We get a lot of 'ink' from websites and bloggers too, and on certain genre-specific titles, mainly horror, we advertise in magazines. We try to aim towards the cineaste audience and get films that they are interested in but that market is shrinking. We have to keep finding ways of reinventing ourselves and expand our base.

How do you feel about the importance of having extras on your Blu-ray releases?
The trouble is that we are governed by our budgets. We put out five or six titles a month, which is a big outlay. Extras tend to eat into our margins, and if we start to compromise there then we won't have a business. We have to draw a line somewhere. We are very proud of the products we release. Even though Sony and Fox give us beautiful transfers, which are often 4K restorations, we do sometimes have to go the extra mile and spend the money bringing the quality up to our own rigid standards. In fact, there were some titles, like ON THE BEACH (1959), that we passed on because we weren't happy with the elements, and there was no way we were going to put out a print with lines across the image when we are charging our customers $29.95. We want our customers to always expect pristine masters for our titles. There were a few titles that we put out that were marginal in that area, but we felt that spending any extra money cleaning up the prints, especially on our limited budget, would not have made a significant difference. 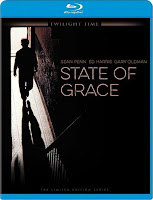 Commentaries like those on STATE OF GRACE (1990) and THE FABULOUS BAKER BOYS (1989) were astounding.
We've been able to do some of these commentaries, with Nick sitting with the filmmakers, because they haven't charged us to do them. Nick's research is always impeccable and because of his great knowledge he is able to prompt filmmakers throughout the process of doing the commentaries. It's then when all the memories start to come back and all the information floods out. Our commentaries have been very good and have been well-received so we are going to try and continue doing them, although we can't do them for all of our titles.

When Warners released the Director's Cut of THE EXORCIST (1973) on DVD, they asked me to sit in with Billy Friedkin to do a commentary with him, and once we got him talking, it was fascinating. I remember he was talking about the challenges of shooting the opening scenes in Iraq. If you love a film it's always interesting to hear how they did certain things.

How did your interest in Nancy Kwan's story come about?
When I was 18 I saw her in the film LOVE IS A MANY-SPLENDORED THING (1959), and like most men of the day, I fell in love with her. I thought at the time she was the most stunningly beautiful creature I had ever seen. When FLOWER DRUM SONG (1961) came out I thought she was really going to go places, but she did a number of pictures and then seemed to fade away. I never stopped wondering why this had happened. While I was at Warner Brothers I wanted to put three of her pictures out on DVD – THE MAIN ATTRACTION (1962), HONEYMOON HOTEL (1964) and THE WILD AFFAIR (1965). I also thought about doing a thirty minute documentary about her life and career as one of the extras. Warners were not so interested in putting the titles out, but as I researched her life and career further, I became more and more fascinated, and I found out that there was more to her life than I already knew. For exampe, in THE WORLD OF SUZIE WONG (1960) she has a child and loses it. The same thing happened to Nancy in real life. Iy was a case of art imitating life, and life imitating art.

A colleague named Veronica Kwan Rubinek became the Head of International Distribution at Warner Brothers. When she was a financial analyst at the studio she used to sit along from me, but I never made the connection with Nancy Kwan. One day, about 14 or 15 years ago, she called me up and said ''I'm trying to get a poster of THE WORLD OF SUZIE WONG and the archive said to call you. '' I still didn't make the connection! I took some posters over to her and had a coffee with her and she said ''Oh, Brian. These are great. My Aunt will love this one here. '' I asked her ''Who is your Aunt?'' She said ''Nancy Kwan. '' I said ''Wow. If I'd known that, you would have been my best friend!'' Veronica said ''I'll call Nancy and we can all get together and have lunch at the studio. '' We had a three hour lunch and I told Nancy about this idea I had for a documentary. Veronica had told me something of what had happened with Nancy's son but I knew this was something Nancy wouldn't want to talk about. I also soon realised that the film would have to be a feature length documentary and that in order to get it done, I would have to raise the funds myself. I had a series of meetings with Nancy for three years, and chatted with her about her life and career. Eventually she started opening up to me about her son, and I told her that this was the story I wanted to tell, and that if she trusted me I wouldn't let her down. I promised her that it would be handled in an intelligent and compelling way. One day she called me up and said ''OK, Brian. I'll do it. '' 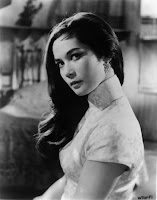 I left Warner Brothers on March 30th 2006. I had decided that a documentary on Nancy was going to be my first project. That night I was on a plane to Kowloon/ Hong Kong to start filming the Hong Kong Suzie Wong Ballet, which I used as an integral way to tell Nancy's story. I did a deal where I agreed to bring Nancy to help promote the show, and in exchange they'd let me film the show. They wanted a standard press conference in a hotel, but I suggested doing it on a ferryboat that was synonymous with THE WORLD OF SUZIE WONG. It took a while to convince the Hong Kong Ferryboat Company to loan us a 60s Ferry Boat for the press occasion, but the press conference proved a big success. It helped make the show hugely popular, to the extent that they brought it back the following year.

The feature documentary took four years to shoot. We even shot in Cambodia, and I ended up financing most of the movie myself, albeit with the help of a retired dentist in Hawaii. There are some subtle changes to the film that I would make now, but the important thing to me was that Nancy was very happy with it. My first cut was about 6 hours long. There was so much great footage, but you can't include everything. Another great thing about the film was that we were able to use the film to raise quite a bit of money for various charities, including an orphanage in Cambodia and research for AIDS vaccines. The whole project was a fascinating journey. It took Nancy and I all over the world, showing it at various festivals, and we became great pals. She's a lovely lady and we often chat on the phone and have dinner when I am in L.A. Who'd have thought I'd become good pals with the film star that we all fell in love with watching on the screen as an 18 year old?

Has your passion for film ever waned over the years?
Not at all to be honest. Frankly I think my passion for film has kept me young. I've been lucky to work in film for pretty much all of my life. I got some terrific breaks. I got to see a lot of the world through Warner Brothers. I think only about 10% of people in the world get to do what they love. Working with Nick on Twilight Time has only reignited the passion because we are working on films from the periods that we love. I've been blessed. As I once told a Japanese journalist, ''If film was a woman, then for me, I have lived the great romance of all time. '' Film is intangible but that's what's great about it – you get to live your dreams through it. I've had a pretty interesting life, and I have met a lot of amazing people. I still get excited about films as much as I ever have.