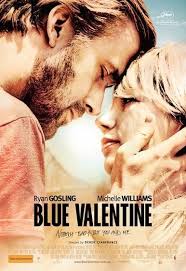 When we get to the end, we think about how it all began
by Paul Rowlands

BLUE VALENTINE is a companion piece to the likes of LA NOTTE (1961), SCENES FROM A MARRIAGE (1973), BAD TIMING (1980) and EYES WIDE SHUT (1999), all of which chart troubled romantic relationships. VALENTINE tells the story of the dissolution of a volatile, fragile marriage that once had real worth. The end of the relationship is made even more poignant by Cianfrance's decision to tell the story in a non-linear fashion, and slip time frames, between their hesitant, awkward courtship and their current estrangement, linking it with the likes of the brilliant ETERNAL SUNSHINE OF THE SPOTLESS MIND (2004).


For Cianfrance, this film was the walking definition of a labour of love, having spent 12 years and 67 drafts on the project. The project was inspired by his own parents' divorce when he was 20. (The title comes from both a 1978 album and song by Tom Waits.) The two leads had been involved with the project for at least half a decade each. Gosling had been involved for a slightly less period of time since his role was to originally have been played by Heath Ledger (the father of Williams's real-life daughter). Upon his death the production of the film was delayed for a year. Cianfrance's original idea was to film the courtship scenes and the break-up scenes six years apart. What he got was a month, which he used productively by having Gosling and Williams live together as a couple to aid the reality of their long-term relationship on film. 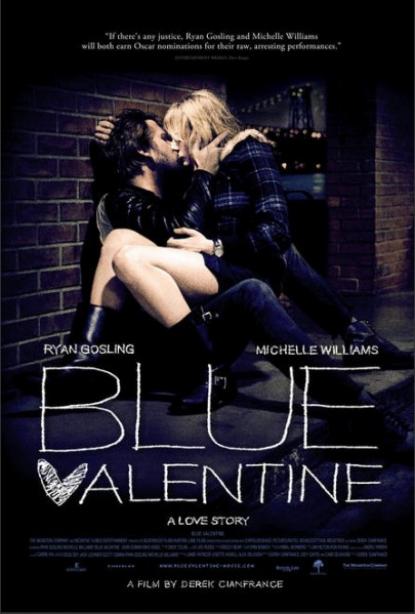 The emotionally brave performances of Gosling and the Oscar-nominated Williams go beyond standard acting to the point that the film feels like a documentary: Cianfrance's hand-held, lo-fi filming style beautifully complementing their naturalistic work. (There were no rehearsals and Cianfrance usually only shot one take. ) The courtship scenes were shot on 16mm, and the break-up scenes with RED cameras. The two stories really do feel like two differently shot films that were shot many years apart. The courtship scenes are more colourful and loose; the break-up scenes are shot in a darker, edgier, more hand-held style. The former emphasises hope; the latter fate. Impressively, the actors have convincingly aged in the later story too. (Gosling's balding appearance is based on Cianfrance's real appearance.)
The couple in the film could be any couple who are amazed to find in each other kindred spirits, but are in many ways different people. The idea that couples who survive are the ones who change together is proven apt here. Parenthood and the passage of time change the couple, but differently, to the point that they become incompatible. BLUE VALENTINE is provocative and compelling enough to make the viewer ask questions of the characters, and also themselves if they are in a similar situation. Could the couple have made it work? Is any one of them more to blame than the other? Should they have never gotten together? Were they doomed from the start? Is how we begin our relationships a factor in their survival? (Their relationship arguably proves Tolstoy's idea that relationships made on an unmade bed don't last.) Is love alone enough to sustain a relationship in the harsh realities of this world?

The arrival of the film into theatres was as difficult as it's birth. The MPAA objected to the sexual explicitness of the hotel room sex scenes and awarded the film an NC-17, the kiss of death for it's commercial chances. Miramax head honcho Harvey Weinstein submitted an appeal and the film won an R certificate. The sex scene is explicit, but tasteful and artistic, and pivotal in communicating that this couple can no longer be intimate and kind to each other. As in BAD TIMING, the audience realises that this relationship is doomed after a sex scene. We realise that the couple have gone beyond the pale: left alone with a chance for intimacy they resort to hurting and abusing each other. The scene is devastating: it's futuristic 'blue' colour scheme disorienting (the pair are drunk in the scene), the hand-held camerawork and cramped conditions enmphasising that their relationship has become a prison. The scene, and in fact the whole film, owes something to the work of John Cassavetes. It has the ominous, nervous, doomy feel that a picture like WOMAN UNDER THE INFLUENCE (1974) had. But this is Cassavetes with more of a dreamy, hazy, poetic feel in the early part of the story. Although the film is certainly bleak, there is a positive, motivating message to be had. Love is elusive and ethereal, and you cannot hold it in your hand. It can slip away without warning. But one thing is for sure, you cannot keep it if you don't care for it and you don't work at it. (As U2's 'One' would agree).

Cianfrance's instincts as a filmmaker are excellent. The film marks the arrival of a major new talent. As a director of actors he knew what information to impart to the leads and what information to hold back. An example is the memorable scene where Williams tapdances to the accompaniment of Gosling singing and playing the ukilele. Gosling was only told to ask Williams if she had a 'special talent' at a certain point in the scene. Cianfrance knew tap dancing was her 'special talent', and made sure Gosling was carrying the ukilele. The scene that transpired seems improvised because it was. The director also commented that he was lucky that the pair had instant chemistry. (They had only briefly met once before and had both acted in 2003's THE UNITED STATES OF LELAND, but didn't share any scenes.) As a writer and editor, his instincts are equally excellent. Films with narratives that slip between past and present succeed or fail on the points where the narratives slip. Get it right and you have THE GODFATHER, PART II (1974). Cianfrance gets it perfect. The film isn't melodramatic or overdone, but feels emotionally honest. It successfully creates the illusion of real life and is a cinematic transposition of the way we remember things: when we get to the end, we think about how it all began.

BLUE VALENTINE is brilliantly made. Brutal but beautiful. Harrowing but moving. An examination of the birth and death of a relationship. It's reputation can only increase over time. The film is one of the first masterpieces of the new decade.

NB. Cianfrance and Gosling will soon collaborate again on the crime thriller THE PLACE BEYOND THE PINES. Gosling will play a professional motorcyclist who starts robbing banks to support his baby son; Bradley Cooper (THE A-TEAM, 2010) will play the cop on his tail. It sounds really exciting. As Cianfrance has noted, whereas BLUE VALENTINE was violence without guns, this new film will literally have guns.

AVAILABILITY: The film is available on DVD and Blu-ray with a Cianfrance commentary and deleted scenes.

SOURCES:
The commentary and special features on the R1 DVD/ Bluray.

Paul Rowlands is a Japan-based writer. After completing a BA Humanities course (majoring in English and Science) at the University of Chester, he moved to Japan in 1999. Paul writes for the James Bond magazine, Kiss Kiss Bang Bang, and has had an almost lifelong obsession with cinema, something the advent of DVD only increased. An aspiring novelist, short story writer and screenwriter, he has until now mainly wrote about film for his own pleasure, various blogs and for so far unpublished projects.
Posted by Paul Rowlands