AN INTERVIEW WITH LEA THOMPSON (PART 2 OF 3)

Lea Thompson made her name as one of the most popular and talented young Hollywood actresses of the 80s, with her performances in films such as BACK TO THE FUTURE (1985) and its two sequels, JAWS 3-D (1983), ALL THE RIGHT MOVES (1983), THE WILD LIFE (1984), SPACE CAMP (1986), HOWARD THE DUCK (1986), and SOME KIND OF WONDERFUL (1987). She has continued to work successfully as an actress in film and on TV (most notably as the lead in Caroline in the City and Switched at Birth), whilst also breaking out as a director of episodic television and TV movies (the Jane Doe films). This year sees the release of her feature debut as a director, the comedy drama THE YEAR OF SPECTACULAR MEN, which also sees her collaborating with her daughters Madelyn and Zoey Deutch. In the second part of my three-part interview with Lea about her career, I spoke to her about her beginnings as a dancer, and her experiences making JAWS 3-D, ALL THE RIGHT MOVES, RED DAWN, BACK TO THE FUTURE and SOME KIND OF WONDERFUL.

You started your career at the age of 14 as a dancer. How do you think being a dancer prepared you mentally and physically for being an actress?
One of the problems with being a dancer was that I wasn't trained to think in words. I think so much in images and movement. That really helped me as an actress in a lot of ways because you have to separate your brain so much. You have to have one side that's creative and one side that's analytical and they have to work together all the time. As a dancer it's very technical and you have to make it look effortless. It helps you as an actress because there are so many technical things that you have to do. It throws a lot of actors off but I've always been able to separate my thinking in that way, which is also extremely useful as a director. Movement is important in acting so it helped that I was thin and flexible when I started my acting career. The general wisdom is that dancers make pretty bad actresses. My first manager used to forbid me to tell anyone that I was a dancer! It's funny though. If I talk to people like Shirley Maclaine, who used to be a dancer, they always consider themselves dancers. And I'm the same. In my heart, I still consider myself a dancer even though I can't dance anymore. Performing on stage my whole life and being attuned to those rhythms is interesting. It's hard to put my process into words because I've been doing it so long!

I imagine the dance training helps with the stamina needed for the long hours involved in acting too.
Definitely. There's a whole class of actors who get here and then say ''This is hard work. This is a drag.'' But when you're a dancer, you're so happy that someone has put you in the front row, and I'm still like that. I get so excited. I'm always grateful that I have a job and that someone wants to look at me and that I am in the spotlight. It's so brutal when you're a dancer and you're in the back row and your feet are bleeding and nobody cares. My dancing experience gave me this showbiz mentality. Some actors don't have it, and it's deadly because you have to be on when it's your time to be on, and you have to love it.

One of your many accomplishments as an actress is that in your film debut you got to be bitten by Jaws in JAWS 3!
And in 3-D as well! I should have known that I was in for an interesting and unpredictable career. I also waterskiied over a pyramid of little girls in the film! I was pretty bad ass doing a stunt like that!

They gave you a pretty brutal injury in the film for such a nice character.
Originally they were going to kill me but they decided not to. I remember I died in the script, but they decided to just give me this big wound. That was literally my first day of shooting on a film ever, being bitten by a shark. I figured they were trying to replace me on my first day!

You acted with a pre-TOP GUN Tom Cruise in ALL THE RIGHT MOVES. Even back then did he come across as an extraordinarily focussed and talented actor?
Absolutely. He was extremely serious and focussed, and hardworking and polite and kind. Very good-looking too. I never could have expected that he would be this huge star forever. Tom is a great Everyman. I loved working with him. He taught me a lot and made a lot of sacrifices for me. He's very generous as an actor and has a great work ethic. The only person I have ever seen work harder on a movie is my daughter Zoey.

What was it like being directed by John Milius on RED DAWN?

John Milius is a beast. He was amazing and crazy and fun to work with. RED DAWN was the most fun I ever had making a movie. It was great being on a camping trip for four months with horses and so on. It was a Western, really and Westerns are great to make. We took over an entire town and they didn't care if we blew up one of their buildings. It was insane. Right outside our hotel window we could see the town square that they had set dressed for when the Russians invaded in the story.

Do you have a favorite Milius anecdote?
The only thing I remember is that his nickname for me was Beast Woman, and I have no idea why! I was all of 100lbs!

Your performance in BACK TO THE FUTURE is wonderful and one of my favorites. How did you find the key to playing Lorraine?
I'm just letting that sink in. You're very sweet. I was not that girl so I actually took something from the playbook of Tom Cruise. He would listen to music or a certain song to get into character or to get into a particular mood. When we did ALL THE RIGHT MOVES he would listen to Bruce Springsteen incessantly. I would listen to Mr. Sandman all the time, and music from the period. I read a lot of magazines from that time period too and drove a 54 Chevy Bel Air to get a feel for the 50s. I also immersed myself in the propaganda that women were being force fed back then. I think I got the part because I could show both sides of Lorraine – as older, with all of her life sucked out of her, and younger, when she is literally lusting after her own son, which I somehow had to make seem innocent, which was a task! It was an interesting part to play. I did both sides in my audition, and it was weird that I understood both of them completely. I feel incredibly grateful to be known for such a great part in such a great movie, even if it meant years later I never got to do a big movie again. 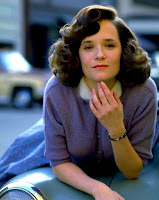 Is it true that Spielberg directed your audition?
No, he didn't direct it. He operated the big VCR camera.

So, there was no pressure at all!
He's such a lovely guy. A couple of years ago my daughter Zoey was auditioning for him in the same room and he made her feel as comfortable as he made me feel. A lovely, lovely man.

What kind of person were you back then? Were you able to set your nerves aside and think ''I am going to get this part''?
I don't remember being nervous at all, which was weird. Maybe I already had the feeling they liked me or something. Sometimes things just click, and sometimes they don't. I did Cabaret on Broadway, and it makes no sense that some songs you think you're going to sing well, you don't. When things click, it's just this weird alchemy and magic. I think I just felt I clicked with the part of Lorraine.

When you were first filming BACK TO THE FUTURE with Eric Stoltz, did you have any inkling things weren't going well?
Yeah, I did. Everybody was doing their own kind of styleof acting, and it wasn't super naturalistic. Eric was doing this naturalistic acting in the middle of all this and it just didn't really work. If you watch the movie, we are all doing these massive characters. Crispin Glover is doing commedia dell' arte, I'm doing a cat in heat, Chris Lloyd is screaming exposition, Tom Wilson as Biff is twiring his mustache. We were all doing these really bizarre characters that were really big, and Eric was in the middle acting as if he were doing a normal movie. Eric is a brilliant actor, but they needed Michael's Buster Keaton style of acting. What was weird is that they replaced Eric so late in the movie, after six weeks.

You got to work with him on SOME KIND OF WONDERFUL. Was there any awkwardness at first?
I felt very badly for him. He was my friend. I felt bad for Crispin Glover, who was also my friend, when he got replaced on BACK TO THE FUTURE PART II (1989). Eric and I remained friends and he was actually the one that convinced me to do SOME KIND OF WONDERFUL. They had fired an actress and he bicycled up Laurel Canyon, which is a very hard thing to do, to ask me to do it. I originally turned it down because I felt the part they wanted me to play wasn't as good as Mary's.

Was that a fun movie to shoot, working with Eric, your future husband Howard Deutch directing, and John Hughes writing the script?
It's a very tender movie for me because I met Howard on it and we married and had kids and are still together. That's another movie of mine that is beloved. I think in terms of popularity it's BACK TO THE FUTURE, SOME KIND OF WONDERFUL, HOWARD THE DUCK and RED DAWN in that order. Everything stills hold up about the movie, even the music. John and Howie really put together an incredible soundtrack. I wish they made movies with music that good nowadays.

THE YEAR OF SPECTACULAR MEN will be released in US theaters in November 2017.