Barry Hunt is the Artistic Director of Sowelu Theater in Portland, Oregon. Along with the Soweto Ensemble, he developed new acting methods derived from the influence of Meisner, Chekhov, Robert Ravan, and the Viewpoints and Suzuki methods. He has around 45 years of experience of directing and acting on stage, television and film. After acting in the play The Further Adventures of Anse and Bhule in No-man's Land, a post-apocalyptic, hypnotic, immersive fable written by Tania Myren, who created a new language for the production, Hunt set about turning it into a movie. It was an endeavour that would take three years to reach the screen, and it's an unforgettable cinematic experience. I spoke to him about the experience of making the movie, and in the first part we discussed his initial reaction to the play, his reasons for wanting to make the film version, the process of adapting the play for the screen, how the limitations impacted the making of the film, and his approach to directing the film.

What was your first response to reading the play?
It was very interesting and very challenging. The film has all these visual images to go along with it, but the play doesn't. So you just have all this language and dialogue and stories, and you have to dissect it all and figure out what it's really talking about. It was very exciting. I actually played Anse in the play. I did not direct the first production.

Why were you so passionate about making it into a film?
It felt very cinematic to me. There's so much imagery in the language itself that when we did the play, that was one of the audience responses. They were visualising skies and landscapes. It felt like it could transition to film quite well.

Had you had experience directing films before?
This was the first film that I directed. My background is in theater acting and then theater directing. We have a company of actors and we work in an ensemble. We have a training ground, which has a lot of young people, and they took the training and went into film. I was actually mentoring these trainees. Next week I'm actually going to go to a screening of one of the young people's fifth film, opening at the Northwest Center. He's had films sold at Sundance and so on. Through that mentorship, we learned about film and realised from these young people that we can do it too.

Was it immediately clear to you what changes you were going to have to make to transfer the play to film? What elements from the play did you want to preserve?
We have a relatively organic process so we are never certain, but we had a feeling we had to open things up and stretch it. Tania Myren's dialogue is intact, although we did cut a little of it. We found a way to have Anse and Bhule travel, so that it became more of an adventure. In the play, everything took place in one location. We also opened up the dreams and the visions, and made it more about the landscape.

Is it true that the movie took three years to shoot?
It took two years to shoot, and a year to edit. We had a very low budget. We had to rely on a lot of generosity. The Maryhill Museum donated a lot of the landscape. Its property that they own. They keep bulls on it. Some of the locations, like the caves, were in state parks in Central Oregon, so the Bureau Land Mangement helped us to film there. We ran out of sunlight and we ran out of time, though. We were right at that August-September seasonal change, and the weather changed on us. It was very frustrating, but we all just decided to pick it up again the following year. We went back, waited for the right sunlight, and finished the film.

Was there any concern about being able to keep the actors?
Well, the ensemble has been together for about twenty years, so it wasn't really a concern for us.

With the extended period of shooting, did your vision of the film change at all?
It was constantly transforming. We had many different screenings, many different cuts, and we found many different ways to open the story. We weren't sure how to establish the film. Opening with the scene in the orphanage was our last idea, and wasn't actually mine. We all collaborate. There were some scenes that we shot that were cut out of the film for the issue of length as well.

In what ways do you think the limitations that you were faced with regarding time, money and locations, helped the film?
Quite a bit. We like limitations. We like to be confined in particular ways. I always give the designers intense artistic freedom with some kind of limitation. In this instance I told them ''This is the future, it's post-apocalyptic. You can raid our entire theater storage closet, but you can't buy anything. Everything has to be recycled. '' That kind of limitation helps them look at the circumstances of the story and think about ''OK, these kids are in a cave. They have grown out of their clothes, so what do they have now?'' Their clothes are made out of bedding and bedsheets and blankets. Bhule's armbands are made from the legs of a pair of jeans that would fit an eight year-old.

I collaborated a lot with the DP, Michael Pritchard, who won the Best Cinematography Award at the Santa Fe Film Festival for the film. We would often run out of time. We were unprepared for how long the make-up would take every day, and we shot that opening scene in the tent because the actress was in make-up for so long. We had to continually adapt. I remember when we were doing the very last shot of the movie, when Bhule is dreaming of floating on the leaf, Michael said to me ''No film would ever be shot this way, but all the best parts of the film are because we did it this way. '' The shot of the four guys on the ridge, shot on their backs as they have just come out of the caves, was just the guys hanging out for real. Michael just picked up a camera and shot it.

How did playing Anse in the play influence the way you direct the film?
I have directed several things more than once, and I find the next time I go about it I try to look at it with fresh eyes. I knew I wanted Garfield Wedderburn in the film. He's nothing like me. He was going to be a different kind of Anse.

What was your directing style like on the movie?
We have a couple of ways we go about it. We have a lot of workshops and a lot of physical theater workshops. We did a lot of exercises around ''What is it like for a group of boys to inhabit a small space?'' That way that they kind of carry each other a little bit and lean on the other when they are tired of traveling came from watching my own kids actually. For example, when they were little kids, my sons would move around in clusters when they went bowling. We approached the circumstances and then tried to explore them physically. We didn't come at the scenes from the language base, even though the language was a predominant source of our imagery. We had to turn it into something that had tangible physical manifestations. The actors are then immersed in their roles, in the context and in their bodies, and are just playing the scenes at that point. 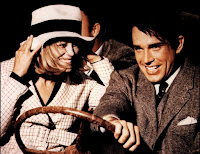 Did you have any other post-apocalyptic movies on your mind at all when making the movie?
I was attracted less to post-apocalyptic movies because that wasn't really the genre that attracted me to the film. I started realising that it was a lot of Warner Brothers films, stuff like BONNIE AND CLYDE (1967), silent films of the 20s and elements of Westerns. It all shows up in the costuming and the way the dream sequences work and stuff like that. When I interviewed Michael for the role of DP, I found his approach was a mix of horror genre and Westerns, and that mix seemed to fit for me.

Were you keen to preserve at least some of the theatricality of the play?
Certainly an element of it. The dream sequences to me are very theatrical because of the sets. They are the Fellini pieces. I grew up with his movies and Bergman's too. Back then there was no CGI and they were building everything for real. Anything that was abstract in our film was manifesting something that was theatrical.

Did you have a strong idea of where you wanted to go with the score before you found a composer?
I had no idea. I couldn't picture it in my mind. We met with different composers and then someone strongly recommended John Clay. It was very collaborative. We sat with the film for a long time. I talked with him about what the film was about and he started responding to it. John is a rock musician and is actually on tour now, but interestingly, he and Tonya share a liturgical background.

Part 2 of the interview.

Email ThisBlogThis!Share to TwitterShare to FacebookShare to Pinterest
Labels: Interview: BARRY HUNT on 'ANSE AND BHULE' (PART 1 OF 2)