Barry Hunt is the Artistic Director of Sowelu Theater in Portland, Oregon. Along with the Soweto Ensemble, he developed new acting methods derived from the influence of Meisner, Chekhov, Robert Ravan, and the Viewpoints and Suzuki methods. He has around 45 years of experience of directing and acting on stage, television and film. After acting in the play The Further Adventures of Anse and Bhule in No-man's Land, a post-apocalyptic, hypnotic, immersive fable written by Tania Myren, who created a new language for the production, Hunt set about turning it into a movie. It was an endeavour that would take three years to reach the screen, and its an unforgettable cinematic experience. I spoke to Hunt about the experience of making the movie, and in the first part we discussed what he would like audiences to get out of the movie, how he feels about the current distribution market for films, how he would approach directing the play after the experience of making the film, and what projects he is working on and has coming out. 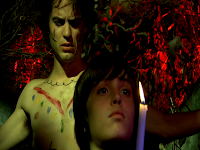 What would you like audiences to get out of the movie?
That's always a tough one for me. I look at the material and I try to tell it as truthfully as I can. I'm interested in the inner life of the characters, what they're going through and what their transformations are. I feel that if I can do that, then it's going to have some kind of human impact. We had had the experiences of how audiences had responded to the play. We found that audiences just had to let go and yield in order to hear that language. Most people we knew were telling us to treat the film as an art film, and I think its discovery recently by fans of the post-apocalyptic genre is really appropriate. We didn't know how to bring it to that audience. One festival director from London had turned the film down but he took some time to talk to me about it. He said ''I think it could be a cult classic, but it's just not for me right now. '' We felt that the film had to be discovered. , and it has happened.

How do you feel about the market for a film like ANSE AND BHULE, with all the options to get a film seen, and theatrical releases just one of many windows?
I'm very happy about it. Aaron Katz is the name of the guy I told you about, who we mentored and is now making films. He's in his thirties, and he's on the cusp. His movies are opening in theaters and are getting really good reviews, but his generation is moving away from that and are finding their audiences online. We were in pre-production for quite a while, and during that timeI was so happy that I had Netflix because it had a library of low-budget American independent films that I would never have seen otherwise. I loved watching those movies because I felt I was going to learn something about what I was about to experience as an independent filmmaker. I don't want Netflix to move away from showing those kinds of films, but now Amazon is showing a lot more of those kinds of films. At the end of the day, we are able to now see a lot more of different kinds of movies and it is easier for them to find an audience.

If you went about directing the play on stage after you have now adapted it as a film, how different do you think your approach might be?
I think the play would be more abstract because of my experience making the film. I would want those dreams to show up in the play. In the original production, those dreams were in language form. We went more into the psyche of the audience with the film and it was a great experience. The audience is visualising the dreams when they are watching the play and that's why people said ''Hey, it needs to be a movie. ''

What projects are you currently working on?
We are doing Tania's next play, a piece called Cassandra Terminus, and it's the ancient myth of Cassandra juxtaposed to a modern love triangle. We've had that in development for a little bit and we are producing that in the fall. Also, Dan Hill, who plays Bhule, is making his directorial debut from a screenplay he wrote, and I am associate producing it. It's shooting in the summer. We also have THE LOWER ROOMS out. It's a drama about a Tibetan survivor of political torture who comes for rehabilitation to Portland. He stays in the home of a family and he ends up alone with a 16-year old girl for a long time. She gets very invasive in his privacy and wants to be tortured by him so she knows what it feels like. She then gets involved in a cult through her boyfriend and gets into some pretty dire circumstances. It forges her relationship with the survivor, because he has to come and save her. The film has won some awards at festivals, and I think its pretty cool.

THE LOWER ROOMS is available on Vimeo.

Email ThisBlogThis!Share to TwitterShare to FacebookShare to Pinterest
Labels: Interview: BARRY HUNT on 'ANSE AND BHULE' (PART 2 OF 2)