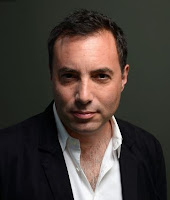 Richard Shepard is the acclaimed director of THE MATADOR (2005) and DOM HEMINGWAY (2013), which gave, respectively, Pierce Brosnan and Jude Law the opportunity to deliver shape-shifting performances, and THE HUNTING PARTY (2007) with Richard Gere. He is one of the most underrated of modern directors, making films that cross genres and mix tones successfully, and make you laugh as well as move you. Shepard is also one of TV's most in-demand directors of television, directing the pilots for such hit shows as Criminal Minds, Rosewood, Salem and Ugly Betty. He is also a regular director on Lena Dunham's TV series, Girls. Shepard travelled to Tokyo to make the short film TOKYO PROJECT, an unconventional love story starring Elisabeth Moss and Ebon Moss-Bachrach available to see on HBO, and in the final part of our three-part interview, I spoke to him about whether the film rejuvenated him, what Japanese audiences thought of the film, his upcoming projects and his thoughts on BLADE RUNNER 2049 (2017), given he is a big fan of the 1982 original.

Did TOKYO PROJECT rejuvenate you?
I direct television pilots for hire, and I write and direct my own movies every couple of years, and any time I do anything creative, it's a real kick in the ass. It's a solitary life when you're writing a script, and it's hard to get a movie going, so I've always been lucky in that I've always been able to make enough money to allow me to do other projects I want to do, whether it's a documentary or a short. It's very invigorating, and oddly in Hollywood, very powerful. When people ask you what you have been doing and you answer ''I've been making a short film in Tokyo with Elisabeth Moss'', it makes you sound much cooler than you really are! It makes you more valuable in a way because people think ''Let's hire him. He doesn't need us. He goes off and does these other things. '' It's a psychological thing. Creating new projects also creates more work opportunities. Both TOKYO PROJECT and my John Cazale documentary were done on spec before being bought by HBO. I didn't wait for someone to start financing either of them. I just started financing them myself based on residual checks I had received or whatever. I'm lucky to be able to do this. If you do good work and you're lucky, someone will pay for it in the end.

Also, doing projects like TOKYO PROJECT and the John Cazale documentary tell people that you're a real filmmaker. Many filmmakers will talk about making short films or documentaries, but they don't actually do them, and they certainly don't pay for them themselves!
Exactly. 110%.


What projects are you working on now?
I'm loath to talk about projects before they happen but I'm in prep on a new movie called The Perfection. Allison Williams from Girls is starring in it, and it's a very twisted thriller unlike anything I've done. It's a real swing. It's certainly influenced a little bit by Korean cinema. I also just did a pilot for a show called Sweetbitter, and I've been writing scripts for feature films that I'll hopefully get to direct. My confidence level is always high after I finish something, and a lot of work always ends up coming in afterwards. This was definitely the case with TOKYO PROJECT – making it and then showing it, and having people respond to it was a real boost.


Have you had any feedback from Japanese audiences about TOKYO PROJECT?
We haven't shown it yet in Tokyo or Japan but we invited the Japanese people that worked on the film to the Tribeca Film Festival screening and they really liked it. I mean I suppose you could say it's just another story of two white people in another country but that was the story I wanted to tell. I wanted to make sure I was being as culturally sensitive as possible and the Japanese crew was integral in making sure I was. I would like to think that I showed Tokyo in a romantic way but not a fake way. There's a sense of sadness to the film that I felt was important, partly because that is true to big city living. It's easy to get swallowed up and lost in any city.

It's my experience that Japanese people enjoy seeing their own country and culture through foreign eyes. I showed the film to some Japanese friends and they said it made them look at Tokyo in a different light. They really wanted to find out where the restaurants were! Interestingly, they also enjoyed the American GHOST IN THE SHELL remake (2017) and had no problems with Scarlett Johansson being the lead and not a Japanese actress.
That's great to hear. GHOST IN THE SHELL probably only got made because Scarlett Johansson was in it. I saw it on an airplane whilst listening to Radiohead. It's such a visual movie, and it was a really surrreal sensory experience, especially since I obviously wasn't focussing on the plot too much.

I read you're a fan of BLADE RUNNER. Did you enjoy BLADE RUNNER 2049?
I love the first one and I recently showed it to my ten year-old. He loved it too. It was a lot to talk about and think about, and it really held up. I feel like with the sequel, Denis Villeneuve stayed true to certain things and it did legitimately feel like part of the same world, which is not easy, but I just felt that he lost some of the pulpiness of the first movie. I guess I was disappointed. I do love his films though. He's a visionary. ARRIVAL (2016) is great and SICARIO (2015) is one of my favorite movies of all time. I think I need to see BLADE RUNNER 2049 again. I do feel that the hype affected me, and I did watch it waiting for it to impress me, which isn't the best way to watch anything. I just bought tickets for THE LAST JEDI. Opening day. I can't wait.