AN INTERVIEW WITH JACK HILL (PART 1 OF 2) 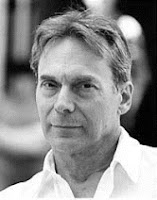 Jack Hill is best known as the filmmaker who, with the hugely enjoyable blaxploitation pictures THE BIG DOLL HOUSE (1971), THE BIG BIRD CAGE (1972), COFFY (1973) and FOXY BROWN (1974), made Pam Grier the icon she is today. Hill was also behind the cult classic SWITCHBLADE SISTERS (1975) (a film beloved by Quentin Tarantino, who brought the film back into the spotlight), as well as the recently rediscovered cult classics SPIDER BABY (1967) and PIT STOP (1969). He has had one of the most varied and fascinating careers in filmmaking, and in the first part of a two-part interview I spoke with him about his early short film The Host (1960), which has similarities to the later APOCALYPSE NOW (1979); his working association with Francis Coppola; his experiences working for Roger Corman; his experiences making 'nudie cuties'; and what initially struck him about Pam Grier's star qualities.

Growing up, what were some of the most important movies for you?
When I was 6, my Dad, who had been a flier in the war, took me to see THE DAWN PATROL (1938) with Errol Flynn, and I remember he pointed out to me that the planes we saw flying were not the same planes we had seen on the field. That was my first lesson in watching for stuff in the movies. The film that sticks out the most in my mind, though, is Carol Reed's ODD MAN OUT (1947).

When did you start making short films? What kind of films were they?
Actually, the only short film I ever made was at UCLA, which was called The Host. The thing is that it clearly became the inspiration for the third act of APOCALYPSE NOW. It is kind of a strange Western where a fugitive rides into this ancient Indian-Spanish mission and meets a mysterious woman. He wakes up the next morning to find he has been accepted as a kind of God. It was all based on James Frazer's book The Golden Bough. The film was my first experience with Sid Haig, whom I later often worked with.

Can you talk about your musical background?
My mother was a music teacher and I studied the piano as a child, and as I got into school and into music I studied other instruments. I played the French horn and I ultimately developed into playing the Hungarian cymbalum. I was one of the only people in Hollywood who knew how to read music and follow a conductor using the cymbalum. I played on DOCTOR ZHIVAGO (1965), and some Mission: Impossible episodes. I also performed as a concert artist playing concertos with orchestras. But then I got into making movies, and I dropped all that.

In what ways do you think your musical background influenced the way you approach filmmaking?
An education in music really gives you a sense of timing and pacing, when to go slow and when to speed up, when to stop and when to hammer. It's an art form that exists in time, and that's the similarity to film.

When you started writing screenplays, what genres and themes did you find attracted you?
My Dad worked in Hollywood as an art director and set designer. He designed the Sleeping Beauty Castle at Disneyland, for example. He worked at Warners, and I grew up with all the noir movies, most of them being directed by Raoul Walsh. They didn't have a lot of money, so they had to come up with a lot of ideas, and that's what influenced my writing.

What did you enjoy the most from your time at UCLA, studying alongside Coppola?
We worked on each other's student films. I just loved being able to get a camera and film and shoot movies, instead of just talking about it. Coppola was a smart guy. He grew up with a background in theater and wrote and directed plays. I came from a musical background. He got me interested in reading plays, and I especially liked Strinberg.

You worked on the 'nudie cuties' THE BELLBOY AND THE PLAYGIRLS (1962) and TONIGHT FOR SURE (1962) with Coppola. What did you learn from those experiences that came in useful when you started directing features?
When theaters responded that people were getting THE BELLBOY AND THE PLAYGIRLS confused with another picture about a bellboy (I don’t recall the exact title), the producers changed the title to THE PLAYGIRLS AND THE BELLBOY, and it took off at the box office. It was the first nudie shot in 3-D. I edited the rough cut of it and then the producer called in a guy he knew who was a very experienced comedy editor. He really taught me a lot about how to edit comedy.

What were the most important lessons you learned working with Roger Corman?
In a nutshell, he taught me how to get the maximum effect with the minimum of means: how to make things look bigger than they are. He also taught me that something has to happen in every reel. Dorothy Arzner at the UCLA taught me a very important lesson: the only crime is to bore the audience. I think I've been successful with that.

Working with Corman, which of his other proteges did you gel with the most?
The only protege that I can say I really gelled with was Francis Coppola; he brought me on board first to work on finishing DEMENTIA 13 (1963), and THE TERROR (1963), after he went on to mainstream companies. Other people who worked on films for Roger were highly competitive, making it an unpleasant environment at times.

You worked in a lot of different capacities for Corman – you were an additional director, a second unit director, a screenwriter, and so on. What are some of your favorite memories?
I also designed campaigns. My favorite was one for a motorcycle picture called NAKED ANGELS (1969). I wrote the catchline for it, and when it accompanied the radio spots all over the country, boy did I hear about it. The poster had a half-dressed woman with a motorcycle gang in the distance, heading towards her, and the gang appeared between her legs in the artwork. The catchline read 'Mad Dogs from Hell Hunting Down Their Prey With A Quarter Ton of Hot Steel Throbbing Between Their Legs! ' These were my Roger Corman days, learning this kind of stuff. That's yet another thing I learned from him: to always try and be outrageous.

After completing your first film, SPIDER BABY, how confident did you feel as a filmmaker?
Not very confident actually because it was several years before it got released. The people financing it had a real estate business that went bust , and the film was locked up in a vault for three years. A friend of mine, a very clever exploitation producer named David Hewitt (THE MIGHTY GORGA), had seen the film and kept track of it through all the litigation. When he was finally able to release the film, he did quite well it. He also trimmed the film a little and actually improved it. After that though, it went into obscurity and was locked away somewhere for many, many years until through a bit of subterfuge I was able to get into a lab and get a tape of it. It was then released again and it has become a widely appreciated cult film. 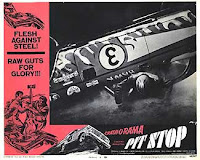 Didn't a similar thing happen with your film PIT STOP?
Well, with that film I had a print, and we were able to get it digitised.

Is it true that THE RAW ONES (1965), which you shot and edited, was the first feature film to include male and female full-frontal nudity?
When we first showed it, everybody was standing around worried that the cops were going to show up and close the theater, but they didn't. That film kind of opened the floodgates in a way.

Did you enjoy your brief period working at Universal Pictures?
When I screened PIT STOP for them, they were in the midst of making WINNING (1969) with Paul Newman. It was called The Winner at that time. They were so impressed by PIT STOP that they put me under contract. I sat in an office with my name on the door for several months trying to get something made. It's a horror story. They wouldn't read anything I submitted. For example, one agent came in with a script and I thought ''Oh, this is just what they would like me to do here. '' But the next thing I knew he had taken it to Universal himself with another director attached. This is the kind of stuff that you have to deal with in Hollywood that I really hate.

When you first met Pam Grier and cast her in THE BIG DOLL HOUSE, the first of four films you did together, what unique qualities did you feel she had?
I wanted to get a balance between the diferent kind of women we were going to cast in the movie. We had what they used to call a 'cattle call' – we would tell agents what we were looking for and they would send actors in. Pam was one of the girls who came in. I had the girls read in groups to see how they played off each other, and it was clear that Pam was one of these actresses who when they're onscreen , you're going to look at. She had 'authority', even though she hadn't done anything except a walk-on in a Russ Meyer movie. She had been a receptionist at AIP before that. I just thought she was a very strong personality and she gave me the sense of being very professional. She almost stole the show in THE BIG DOLL HOUSE.