The very talented John Lurie wrote the music scores for Jim Jarmusch's first three films (PERMANENT VACATION, 1981; STRANGER THAN PARADISE, 1984 and DOWN BY LAW, 1986) and also acted in them (having lead roles in the last two). As a musician he is the founding member of jazz-punk combo The Lounge Lizards alongside his brother Evan, and he has also composed the scores to films such as GET SHORTY (1995) and ANIMAL FACTORY (2000). He is also a successful painter, having been exhibited around the world.

FISHING WITH JOHN grew out of his love of fishing, and his fondness for filming his trips, some of them with famous friends such as Tom Waits (Lurie had a love of TV fishing shows since childhood). Somehow hearing about all this, Japanese investors contacted him and proposed a TV series in which he went on fishing trips with famous people he knew.

Five trips were filmed, and edited into six episodes that could play in a half-hour slot. Funding dried up halfway through the shoots, but Lurie and his crews managed to continue by using his music budget until the money issues were cleared up. The shows were transmitted on the IFC and Bravo cable channels in 1991. 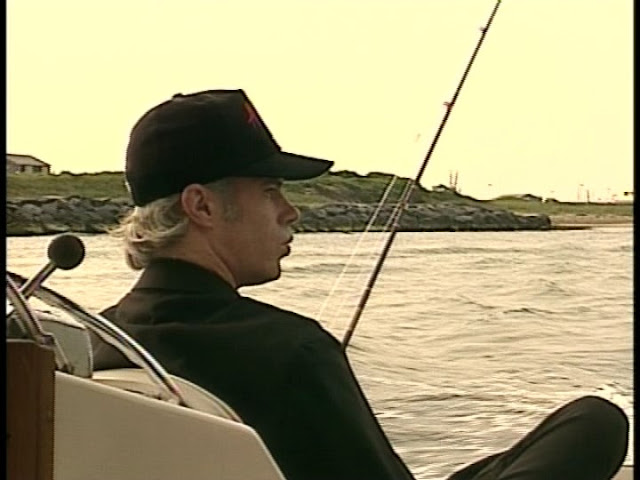 Lurie goes shark hunting with Jim Jarmusch off the coast of Montauk in New York State, red snapper fishing in Jamaica with Tom Waits, fishing with Matt Dillon in San Jose, Costa Rica , ice fishing in Maine with Willem Dafoe, and in a two-part episode, hunting for a giant squid in Thailand with Dennis Hopper.

The beauty of FISHING WITH JOHN is in it's simplicity and the way it confounds expectations to transcend whatever notions Lurie had for what the show would be. (By the last show, Lurie admits that he had learned to stop aiming for perfection and to just let it be.) It really shouldn't work. As a fishing show, it is completely untypical (angering some who take TV fishing shows seriously). Hilariously, Lurie and his guests rarely catch any fish (due to the fact the spots they filmed in were weak for fishing). Also, the show is filmed on video in a very lo-fi style, and some of the highlights of the trip were unusable due to bad sound. Some highlights weren't caught in time or filmed at all. The show isn't a parody of a fishing show, but it comes close, and only because of the way life just kind of took over events (practicalities that had to be considered and concessions made), and because Lurie and his crew were kind of making it all up as they went along. It's a funny show because of Lurie's good humour, the personalities of his guests, and the amusing, unexpected things that happen, eg Dillon refusing to talk to Lurie, or Waits getting irritable with him. (Any hopes of the show being any kind of educational show were doomed because Lurie had to teach guests like Hopper and Waits the basic skills of fishing!) 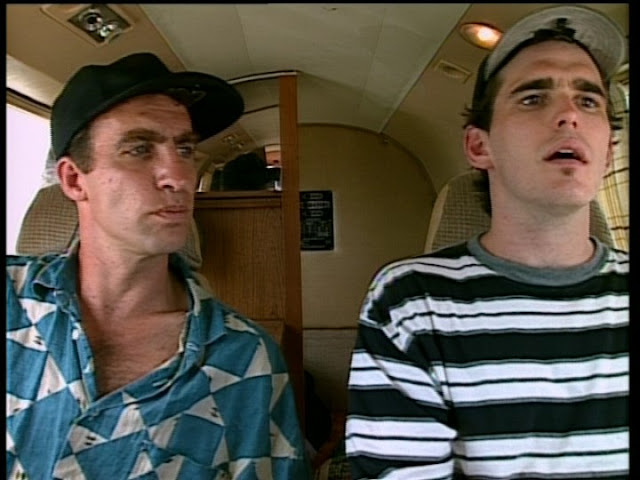 Lurie managed to catch something quite magical: the beauty of real life. And he achieved it paradoxically. The voice-overs from Rob Webb (a voice you have heard a million times) are sardonic and sometimes bizarre. The voice-over tries to hilariously inject a sense of adventure and the supernatural into each trip (also, see if you can spot the WINGS OF DESIRE, 1987 homage). The Maine episode ends by telling us that Lurie and Dafoe starved to death! Many scenes are outright fakery. For example, Lurie and Dafoe didn't build a makeshift house out of wood they could find, nor did they not eat for days. In the Tom Waits episode, the fish they catch were faked: they bought them from local fishermen and faked catching them (if you look closely you can see they're dead!) 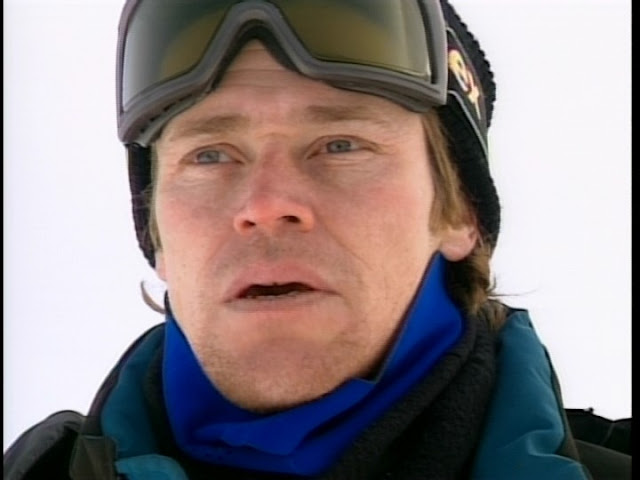 The guest stars either played up to the cameras (Hopper) or tried their best to protect their famous personas (Dillon). Lurie and his guests don't have the compelling conversations that you might expect. But they do reveal themselves as human beings. Jarmusch comes across as a pleasant, interesting guy and more of a listener than a speaker. It made me reconsider his filmmaking style. It's quite possible he and his friends really do speak a lot like his movie characters. Waits is charming and oddball funny, but he loses patience with the whole project and gets grumpy and finally angry with Lurie. (Apparently he got irate later on off-camera, and didn't speak to Lurie for two years.) Dillon is extremely guarded and monosyllabic. Lurie claims Dillon was wary of coming off stupid but Dillon later accused him of making him look stupid - 'God did that' was Lurie's reply. (He had wanted to have his friend Flea of the Red Hot Chili Peppers as his guest but the Japanese investors didn't consider him famous enough at the time, pushing Dillon onto him despite the fact they weren't that close. ) Hopper and Dafoe come across as warm, intelligent, interesting and funny people (Hopper reveals himself as a sugar junkie!) and share real rapport and love with Lurie. 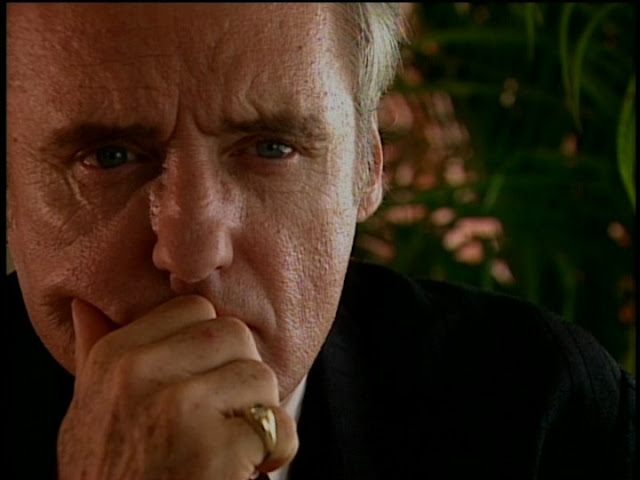 As a chat show it is untypical. Lurie caught how famous people act when the camera is on. By being open, they reveal a lot about themselves, and contradict or reinforce their established personas. By being guarded, they also reveal a lot too. And we, the audience, can empathise with the celebrities, for we all choose to stare into the lens or look away when the red light goes on. Lurie claims he cut many interesting conversations out of the shows because he wanted to focus on the fishing itself.

As a travel show, it's untypical. The show was filmed on video and so lacks the glossiness of typical TV travel shows. Lurie wasn't interested in beautiful locations and wanted to simply go where where the best fishing was. Exotic Jamaica was a last minute substitute for Arkansas! The production money couldn't get transferred in time by the investors and Jamaica was chosen simply because Waits was on vacation there at the time. Maine and Thailand were chosen by Dafoe and Hopper respectively, and were not ideal spots for good fishing. The locations seem very real and just part of the immediate environment. Somehow the lack og glossiness and travelogue style reveal more about the locations. There are some unmistakeably beautiful shots in Thailand that were caught simply because a) it's a naturally beautiful place and b) Lurie et al were simply there at the right time. The local people in the shows come across as real people too and it's because Lurie isn't interested in documenting them. They're simply part of the environment. His achievement puts holes in the ethos of documentary itself. By focussing on something you somehow lose the essence of it. You reveal more by actually not focussing on it. The camera changes everything it sees. If FISHING WITH JOHN is a parody of anything, it's an unintentional parody of a Werner Herzog movie. While Herzog would be pulling a steamship over a mountain (FITZCARRALDO, 1982), Lurie would be desperately trying to catch fish in an area not known for fish but known for crocodiles (the Costa Rica episode). 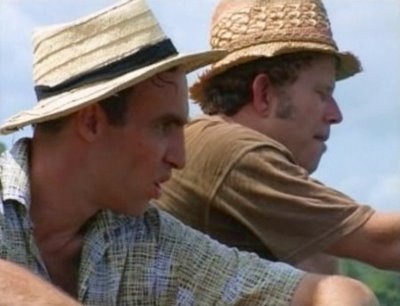 Part travel show, part fishing show, part documentary, part chat show, but not really any of these things but something better...FISHING WITH JOHN is a uniquely entertaining, surprisingly moving piece of work that caught lightning in a bottle: through his lack of know-how, serendipity and misfortune, he captured 'real' and not 'reel' life.

SOURCES:
The commentaries on each episode on the Criterion Collection Region 1 DVD.
'Sleeping with Weapons - Why Did John Lurie Disappear?; by Tad Friend, The New Yorker, 16 August 2010. Recommended reading on Lurie's career and life post- fame. Read it here: http://www.newyorker.com/reporting/2010/08/16/100816fa_fact_friend

Paul Rowlands is a Japan-based writer. After completing a BA Humanities course (majoring in English and Science) at the University of Chester, he moved to Japan in 1999. Paul writes for the James Bond magazine, Kiss Kiss Bang Bang, and has had an almost lifelong obsession with cinema, something the advent of DVD only increased.

Email ThisBlogThis!Share to TwitterShare to FacebookShare to Pinterest
Labels: Review: FISHING WITH JOHN