THE DRIVER is one of those forgotten films that suddenly becomes very prescient. Older viewers (or discerning film fans) must have felt deja vu when watching Jason Statham as THE TRANSPORTER (2002) or before that Clive Owen in THE HIRE (2001-2002) (a series of short films made to promote BMW cars). Nicolas Winding Refn was highly influenced by the film for his modern classic DRIVE (2011) with Ryan Gosling. It seems that Walter Hill was at least three decades too early in his belief that audiences would be interested in thrillers involving quiet, meticulous, super-professional getaway drivers.

The film is a brilliant example of neo-noir. Hill updates the noir genre perfectly to the late 1970's, to the extent that L.A. is in perpetual quiet darkness. The characters in the movie are like vampires: they only exist at night. They go about their business in hotel rooms, bars and on the asphalt streets of the city. The only real noise you might hear are car or bank alarm sirens, gunshots or the sound of spinning wheels as cops chase criminals. Hill manages to make L.A. a real character in the film, and few films have ever made it seem so quiet, deathly and vacuum-like. The characters move around it like it's a prison, with a chessboard as it's floor. They'll never win the game because they'll never escape the city, it's hold on them. Any victory they have is a hollow one. The only way to win is to survive and adapt to the situation, to have a personal code. 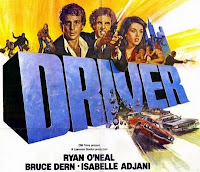 THE DRIVER was heavily influenced by Jean-Pierre Melville's LE SAMOURAI (1967). Both films are mood pieces, superlative examples of the noir tradition, and minimalist in nature. The Driver and The Samurai (Alain Delon) are similarly characterised, and it tells essentially the same story (The Samurai is a freelance hitman). Most importantly, they both share the same message: the importance of a code to live one's life by. When two protagonists are evenly matched, the victor (even if it is only morally) is the one who doesn't break his code. This idea is also expressed in films such as John Woo's THE KILLER (1989) and Luc Besson's LEON (aka THE PROFESSIONAL) (1994), films that were definitely inspired by LE SAMOURAI, one of the most influential noir pictures.


Hill's screenplay is beautifully minimalistic. The characters in the film are not named and the actors' roles in the credits are identified by their professions. Ryan O'Neal is The Driver, Bruce Dern is The Detective, Isabelle Adjani is The Player. The only character with any real personality is ostensibly the guy we are not rooting for: Dern's police detective. We see the film through him, and a la De Niro and Pacino in HEAT (1995), a film which was probably inspired by THE DRIVER (it's essentially the same story with meat on it's bones), this cop is a guy with a lot in common with the man he is hunting. The Driver is the best getaway driver in the business, and is very careful about who he works with. Like The Detective, his vocation seems to be the only reason for his existence. He's a born survivor, and not prone to letting emotion get him into tricky situations. The Detective on the other hand is a man who whilst a law officer, has made the apprehension of his quarry a very personal matter. He will do whatever it takes, even break the law, if it means getting his man.

The mediocre reception of the movie is an excellent example of the notion that it isn't an idea that is successful with audiences, but how you express it. THE DRIVER will be particularly resonant with noir fans, who will appreciate what he has achieved by updating the conventions of the genre. Many neo-noir films seem curiously old-fashioned because the core elements of noir don't resonate with modern audiences: melodrama, snappy dialogue, moralistic themes and psychological subtexts just aren't sexy. But THE DRIVER pares noir down to it's basic minimum. Two guys pitted against each other, one with a code, one without. The femme fatale (Adjani) in the middle. It's a film that will mean different things to different film fans. Some will be put off by the lack of daylight scenes, the inexpressive dialogue, Dern's nervy performance and O'Neal's deadpan acting. The action when it comes is exciting and well-filmed, but there might not be enough for action fans, who will probably consider the film too slow.

Dern and O'Neal are actors who could only have become famous in the late-'60's and '70's. Dern is a very unpredictable, in your face, aggressive kind of an actor with a sly sense of humour. O'Neal is a very subdued, quiet and thoughtful kind of an actor. Hill obviously cast the two men in the roles that would stretch them. In another director's film, Dern would be The Driver and O"Neal The Detective. But it's part of his neo-noir updating of the genre. The lines between good and bad are not so clear anymore (the blowing up of the Watergate scandal was only four years before), and there's no easy resolution at the end. If The Driver is the hero because he maintains his personal code, then he is still a criminal. If The Detective is the villain because he breaks his code, then he is still an officer of the law, just a bad example of one.

So before the B-movie thrills of THE TRANSPORTER series, the adrenaline rush of THE HIRE, Michael Mann's HEAT and his entire ouevre of crime films (Mann and Hill see L.A. a very similar way) and DRIVE (2011), there was THE DRIVER. It's an art film disguised as a thriller. A film that didn't hit big with critics or audiences at the time, but has lasted. And it's lasted because, unlike many thrillers and action movies, it has, in it's noir structure... a code.

NB. The film was written with Steve McQueen in mind. The Driver speaks a total of 350 words in the film.

AVAILABILITY: The US cut of the film is available on a region-free Blu-ray from Twilight Time, featuring an alternate opening, the isolated score and the trailer. There's also a booklet with an essay by Julie Kirgo. The two minutes longer cut of the movie is available on a UK and German Blu-ray, with the same extras, except thirteen teasers repalacing the isolated score and booklet. The film deserves a more expanded release, if only to see the prologue that appeared in some TV prints. The director's cut, two hours long and with more car chases and character development, was shown at an LA screening just once, at the behest of Walter Hill.

Email ThisBlogThis!Share to TwitterShare to FacebookShare to Pinterest
Labels: Review: THE DRIVER