AN INTERVIEW WITH RICHARD RUSH (PART 2 OF 4)

Richard Rush is the celebrated director of THE STUNT MAN (1980, Academy Award nominations for Best Director, Best Adapted Screenplay and Best Actor: Peter O'Toole) and FREEBIE AND THE BEAN (1974). A true cinematic rebel, Rush broke his teeth directing exploitation pictures for American International Pictures in the 60s, and began exploring characters who are multi-faceted and capable of being different things at different times, and live on the outside of conventional society. His debut TOO SOON TO LOVE (1960) was described as the first American New Wave film, and featured one of Jack Nicholson's earliest appearances. In films like HELL'S ANGELS ON WHEELS (1967) and PSYCH-OUT (1968), Rush helped to develop the persona that made Nicholson one of Hollywood's most iconic and acclaimed actors. Rush also directed the counterculture comedy drama GETTING STRAIGHT (1970) with Elliott Gould, and the erotic thriller COLOR OF NIGHT (1994) with Bruce Willis and Jane March. In the second part of a four-part interview, I spoke to Rush about PSYCH-OUT and GETTING STRAIGHT and the counterculture movement, working with Elliott Gould and Harrison Ford on the latter film, being influenced by Ingmar Bergman, and how and why he developed the 'rack focus' technology that became so much of the Richard Rush style. 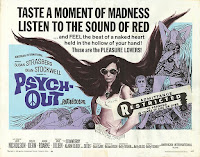 Even in PSYCH-OUT you can see that the movement is starting to change and become much darker.
I think that's true, yes. That was about pretty much the same movement – the hippie movement, which matured into the movement against the War.

Did you feel like you had a comrade in arms having Elliott Gould on GETTING STRAIGHT?
I actually spoke to him this morning! He called me and I was delighted to hear from him. He was great to work with. He turned out to be such a pliable, flexible actor. He had a remarkable quality of being able to do no wrong. If you asked him to change the character a shade for a particular scene, he would do it brilliantly, and yet it would be every bit as authentic and as correct as his original version of it. So I could modify the character in any situation as much as I wanted to and he would never change the quality of the work. He was brilliant to work with.

GETTING STRAIGHT is such an alive film, it's incredible.
It was screened about a year ago at the Laemmle and it was amazing. It played absolutely in a contemporary way and it didn't have a sense of having aged at all. There was a lot of commentary in the audience about ''Why don't you re-release it?''

I read that you said that there are three films you make – ''... the one you write, the one you shoot and the one you cut. '' Which one of your films has evolved the most through these different processes?
It's difficult to say, but offhand I'd say probably GETTING STRAIGHT. When I got the location of the University with all the glass walls we had to suit what was happening inside with what was happening outside, and it opened up enormous opportunities. Also, I'd never shot a riot before with tear gas and policemen beating up people. When I suddenly had the equipment to do that, with the tear gas and the paddy wagons and the helicopters, it became a different version of the movie than I had originally pictured in my head as I had written it. That said, though, the subtleties brought by the actors to THE STUNT MAN brought enormous changes to the film that I hadn't anticipated. When you work with someone like Peter O'Toole, for example, you're going to get invention and style, and you're going to get additional meaning that you might not have intended when you wrote the words.

What memories do you have of working with a very young Harrison Ford on GETTING STRAIGHT?
Harrison Ford was a handsome young, inexperienced actor that was sent to me by the Studio Casting Department, who very well fit the part. So I cast him. I was quite happy with the result. His character had a distinct attitude I liked. And he was original.

Ingmar Bergman called GETTING STRAIGHT the best American film of the 70s. Did you ever meet him?
I never met Bergman, to my sorrow, because I know how strongly he influenced me. There is something wonderfully illusional about Bergman films. He frequently makes us work to distinguish truth from illusion. I feel we invent a great deal of our own reality because we are unable to distinguish what the hell is happening around us, i.e. THE STUNT MAN. Also he has made it mandatory for me to stage processions.

Both GETTING STRAIGHT and THE STUNT MAN make great use of the 'rack focus' you created. What inspired you to develop it?
Somebody had given me an 8mm camera with a 10 to 1 zoom lens. It was a birthday present. That summer I was hanging around the poorl playing with the camera when I realized that with the 10 to 1 zoom lens you could create poetic effects and transitions that seemed to mix near, far, past, future. With the long end of the lens you could de-focus an object, like a flower in a tree, and switch your focus to an object that was a different distance away. The first object would disappear and the second object would suddenly appear, and it made the relationships between the two objects much closer. I then found out that you could do the same with faces as well, and that same evolution seemed to exist, a relationship between the faces, the objects, time and place that was strangely intimate, much more so than a cut or a dissolve. I came up with the term 'rack focus'.

When did you begin to first use it in a film?
I went to Laszlo and showed him my tests and said ''Do you think wecould do this on 35mm?'' He said we should do some tets before we do our next film, and they turned out well, so we tried using it on SAVAGE SEVEN (1968). We developed it a bit more on PSYCH-OUT, and then I went full-blown with it as a camera style on GETTING STRAIGHT, whereI began blocking the actors and the camera at the same time. I developed a technique I called 'critical focus'. For example, I would start on a close-up of a face, which might be thirty yards away but because of the long lens appeared as a close up. As the character walked towards the camera I would keep him in focus and keep the head size the same so it seemed like the world around him was getting bigger, until he got to right in front ouf the camera and then that became the establishing shot. With a close-up, you'd see all of his surroundings. Someone would walk up behind him, and then it would become an over the shoulder shot. In the meantime we handled focus changes invisibly so the shot remained true to what it was at the time. One thing would develop into another. It was a very interesting way of shooting for me and I have used it as my process ever since.

It definitely has a psychological effect on the viewer.
Yes, I think so. I think it sucks them in.

Many zoom shots, no matter how brilliant they may be, call attention to themselves and remind the audience they are watching a movie. Yours make the audience lose themselves in the story and in the moment unravelling onscreen.
I would agree! It strangely enhances things and key moments.

It was perfect for THE STUNT MAN, where you were dealing with paranoia. Would you also say you have a psychedelic way of looking at the world?
For me it's not psychedelic, it's pure reality! I think I might have a goofier way of looking at the world than other people, but recent events have proved dangerously close to the way we used to look satirically at the world. I saw the new movie MARK FELT (2017) the other day. Liam Neeson plays Mark Felt, who was the real Deep Throat who helped bring down Nixon. I bet when they made the film they had no idea it would be such a relevant film for right now. Every scene and every shot seems like something out of the Trump world we are living in.