AN INTERVIEW WITH BRAHIM ACHABBAKHE

Brahim Achabakke is a French stunt co-ordinator, stuntman and actor who has recently started to focus on acting, appearing as the villain opposite Scott Adkins in BOYKA: UNDISPUTED (2016). Achabbakhe has worked with the likes of Jean Claude Van Damme (POUND OF FLESH, THE EAGLE PATH), Jackie Chan (four films including DRAGON BLADE), Michael Jai White, Tony Jaa,  Keanu Reeves (MAN OF TAI CHI), Jason Statham (MECHANIC: RESURRECTION) and famed fight choreographer Yuen Woo-Ping. I spoke with him about falling in love with martial arts, entering the film industry, his experiences as a stuntman and stunt co-ordinator and making the transition to lead acting. 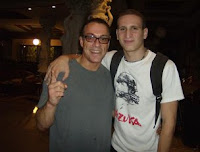 Who were some of the other action heroes you enjoyed growing up?
I really liked Jean Claude Van Damme, Jet Li, and others.

You first studied akikido before studying karate. What is the benefit of mastering more than one discipline?
Aikido was a good place to start because there was a lot of falling and locking with the wrist and so on. Later on I wanted to add kicking and punching so I began studying budo, the Japanese martial arts.

How did these disciplines change your life?
Studying martial arts has changed me from the inside but also the outside in that it has given me a lot of opportunities, like working in film.

How did you first get involved in doing stunts for films?

Back in 2007 I travelled to Thailand to try and get into the movie industry, and it took me six months to get work. It wasn't easy at all.

Who were your mentors when you were performing stunts?
I have worked with a lot of people. I worked with a guy called Tim Man, with Yuen Woo-Ping, and Jackie Chan's stunt team. I have learned a lot on each job I have done.

What were some of the most dangerous or challenging scenes you have worked on?
Back in the day I jumped off a 19 floor building and I did a lot of high falls from 12 meters with a descender.

Do you prefer stunt co-ordinating to stunt performing? How different is it for you?
Actually, I like performing more. When you're a stunt co-ordinator it's more behind the scenes. I like my place to be more in front of the camera.

How do you prefer your fight scenes to look on film?
When I shoot fight scenes I like to shoot from far and use a very wide angle, so I can show everything that is happening in the scene. I also like to avoid using wires as much as I can. 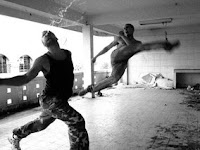 What do you think about the quality of martial arts action in mainstream, big budget films?
On the big-budget films there are a lot of people who want to have their say, and often the action is cut very fast to make the audience believe the actor is doing the work, when really it's a stunt double. What I like about the lower budget films is that there are less people on the crew but the quality of the action is far higher than the high budget movies.

You have worked with some big martial arts stars and actors. What was it like working with the likes of Van Damme, Jason Statham, and Keanu Reeves?
Statham is a perfectionist and likes to do all the fighting himself. He's always trying to make everything as realistic as possible. Keanu Reeves works hard to make the stunt team shine and look good. Van Damme is a very down to earth person and is more focussed on acting these days. Every one of them has something different. 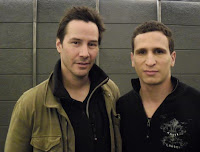 Was it easy to progress to acting in films?
No, it wasn't. People just want you to be a stuntman. I thought I should try acting while I am still young. It's a hard road because it's difficult to find steady acting work.

Was it hard for you to find your persona as an actor?
Every time I act I just try to be as natural as possible and be myself in front of the camera. I am just using life experiences that I have had to create a character.

Which project has been the highlight of your career?
I really liked working on BOYKA: UNDISPUTED IV with Scott Adkins. That was my best role. I played the villain, one of the lead characters and I had more lines and more dialogue than I ever had before. I got to create a character that was really believable onscreen.

Was it a challenge playing a villain?
I love playing the villain. I think it's what I am good at. It was not a challenge at all. I already knew how to play it.


Has Scott Adkins been a mentor to you?
He's more of a role model, someone that I was inspired by.

What is your goal for the next couple of years?
I would like to get more lead roles in action movies and have the opportunity to express myself in front of the camera and do some great fight scenes that the audience can enjoy.

What are some of the other films that are on the way?
I just finished a movie with Donnie Yen called BIG BROTHER, which I acted in. And I just worked as a fight choreographer on a Netflix show called The Legend of Monkey. It will air next year.

What do you love the most about living in Thailand? How does it compare to France, where you grew up?


The quality of life is much better here because the weather is warm and the cost of living is way cheaper. I've always loved spending time in Asia and it's great to be back in the place where I started.