AN INTERVIEW WITH EDITOR JIM HELTON (PART 2 OF 3) 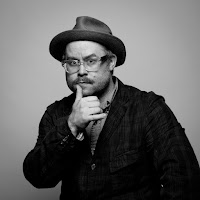 Given that the pre-marriage scenes and the post-marriage scenes were shot separately, and on different formats, how did you and Ron Patane divide up the editing work?
Initially I was the only editor. The first thing I edited was the opening scene, up until when Michelle drives the daughter to school and Ryan gets pissed at the other guy who is driving too fast on the road. Then we brought in Ron, who is great and is a long time partner, and he had to edit from Philadelphia for tax purposes. So, he's in Philadelphia, I'm in New York, and Derek is living in Brooklyn. Derek would spend half of the week in Philadelphia, and the other half with me in New York. Once Ron came on, we split it up so that he was pretty much doing all the scenes set in the present and I was doing everything that was in the past. It was helpful to have those pods because they allowed you to focus. They shot in a very documentary style on Super 16mm film for the scenes set in the past, and on digital video for the scenes set in the present. There was a lot less footage shot on the 16mm. A big part of the moving scenes, by the way, is actual footage of Ryan just moving the DP's stuff from one apartment to another. Andrj had worked with Ryan on HALF NELSON and is filming him move his stuff! The moving guys are real workers. Ryan's back was really hurting by the end of the day.

Were there a lot of deleted scenes? 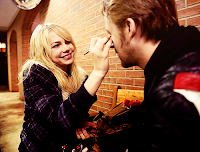 Derek shot about 200 hours of footage. His favorite thing to say was ''We're going to break the record!''At one point, everybody was so excited that we said ''We're going to release one movie called Blue, and one movie called Valentine. '' But there weren't a lot of deleted scenes, just many different versions of scenes that we didn't use. With the RED camera, sometimes there'd be fourteen different versions, but mostly we just pared down a lot of stuff. It's interesting that you have all these things that you fall in love with; all these moments of bravery and courage from the actors, where they're improvising and really connecting, but you have to let the stuff go to make a 2 hour movie. 3 hours is really stretching it. What we learned from making documentaries was that you had only one take but with 'cinema writing' you could create the illusion of there being more footage. We didn't put everything we shot into the film but you can kind of feel it's in there somehow.

Can you give examples of some of the scenes that were trimmed or deleted?
There was a scene where they painted each other's faces in the rain. There was an extension to the night walk where they ended up at a playground in the early morning and twirled on a merry-go round until they were almost sick. There were more moments of them in love on the streets of New York and a scene underneath the bed covers at Ryan's apartment where his roommate walks in. We chose different scenes to be in the film because they were simply better for the story. Often times it is a choice between this scene and that scene because they do similar things. When you tell a story there is a balance and we try not to hit the same beat twice. It is the essence of editing.

How long did some of these takes go?
For the spaghetti dinner scene in the Future Room, the first take was 25 minutes, the second take was about 30 minutes, and the third take was 40 minutes. You can shoot more with digital and Derek exploits that but he likes to give the actors a context so that they have real things that they can draw from. When Michael Fassbender dug the grave in THE LIGHT BETWEEN THE OCEANS, he really dug a grave. I watched 25 minutes of him doing it! Derek doesn't call 'Cut!' While Michael was digging the grave in character, he became exhausted, and started thinking about mortality and became desperate. You can feel all this in his performance in the scene. It's palpable. A similar thing happened in BLUE VALENTINE when Dean/ Ryan buried the dog. Ryan really did dig a grave and that experience opened up the emotion that you see with him and Michelle/ Cindy in the kitchen when he broke down.

The film evolved as it was shot, though. The actors would bring stuff and say things differently. Ryan came up with the stuff he did with the cereal with the daughter at the breakfast table, which was great because the point of the scene is not the dialogue, it's to show that Ryan and Michelle have two different parenting styles. You could write the dialogue in the script, I guess, but seeing it the way Ryan did it was something different.

In general, what kind of takes were favored over others?
Any time I am watching stuff I am looking for things I believe. That's where I start, and I kind of fill it in from there. The 16mm stuff, interestingly, was all about the 'in points', the ins and outs of things. There were longer takes. A lot of the stuff on the film was improvised – where they are walking down the street, the scene with the cab driver, the scene when Ryan's character goes down on her. To me it's just what feels the most honest. And I listen to Derek, because he is the best editor I know. I have things I am sensitive to, and he has things he is sensitive to, and we try to find a middle ground. It's just a big collaboration between Derek, Ron Patane and myself.

You have psychological things that are written that you're trying to bring out and then you find different shades that the actors are bringing, and sometimes the combination creates something different. When Ryan is waiting outside his father-in-law's house because he doesn't like him and he can't smoke inside, and the daughter is running after him trying to get him to come inside, Ryan was shaking, and we thought was really on the edge and that we had to use it. You could feel how much his character didn't like the guy. They shot many versions of that scene to see how they could bring that out more. All the stuff set in the present was shot with two cameras with long lenses, so they were pretty far away from the actors. It's almost like a surveillance point of view.

I remember I asked Derek about the scenes shot from the back of the car and why we couldn't see their faces. And he said ''Well, I feel that would be a privileged position, and that's not how I would see it if I was observing it. '' That is something that really adds to the way that actors act, because it makes them less self-conscious in some way. On BROTHER TIED, Derek was much more about privileged positions, but when we were shooting documentaries and we were in the back of a car with basketball players or whatever, we weren't in a privileged position and it worked better. We did a documentary called ROLLING THUNDER: RIDE TO FREEDOM about these veterans who meet at the Pentagon parking lot and ride up to the Lincoln memorial to protest about POWs. In shooting that film we realised that you didn't have to be in front of them and in their face. You would get a better 'performance' if you hung back, and when we did interviews, we wouldn't feed them lines, we would just have conversations with them, and what you'd get were real 'performances'. All this helped with his approach to BLUE VALENTINE. He didn't want to duplicate the world of documentaries that we knew, he wanted to learn from it.

Do you think the documentary style of the film made the MPAA feel the abortion scene and the sex scene were more explicit than they actually were?
I always felt the reason they had problems with the film was because of the abortion scene. That scene is so intense and it is all about her face and what is going on with her. In the sex scene all you see is Ryan's face, her dress, and Michelle's reaction. That scene was a lot about the 'in point' too I felt. That kind of crazy camera move in. And the scene when they run down the street too. Earlier in the film there's the scene where she's woken up and then there's that sharp cut. These edits throw you in and out of things and almost feel planned but they're not.


Were the jokes (the child molester joke Michelle tells Ryan on the bus, ''It looks like a robot's vagina'') ad-libbed? They feel that way.
If my memory serves me right, Michelle's joke came from her. Some of the jokes came from the actors, but it would depend on the actor.

Was THE PLACE BEYOND THE PINES, given its epic scope and three distinct stories over different timelines, a challenge to edit into a 2 hour 20 minute movie?
We struggled with the whole film once we had it all together. We had all these points of resonance that we wanted to evoke throughout the film but we were also contractually obligated, or at least that is what I was told, to have the run time be at 2 hours 20 minutes or under. The narrative is deliberately inexhaustably going forward. The investors wanted us to break the film up because he wanted to see Ryan again. We were more concerned with making sure Ryan's character cast a shadow over the whole film, which he did. There were cuts where we flashed back to Ryan, but we didn't show them to anybody!

Were there longer cuts that you and Ron and Derek were happy with?
As with BLUE VALENTINE, once we got the film down to a certain length, we were happy with it. I remember the version of BLUE VALENTINE that showed at Sundance was 2 hours 25. Harvey Weinstein's big note on the film was ''I love the film. I just want my ass to hurt less. '' We worked on it further, and got it down to a version we were happy with. The challenge was to make sure we preserved the breath and the space of it.

Part 3 of the interview.

THE PLACE BEYOND THE PINES trailer.

THE LIGHT BETWEEN OCEANS trailer.