'If a film-maker of this order and subtlety and taste is not encouraged, what hope have we?' Marlon Brando, 1987 (after the film was threatened with cuts by the MPAA).

Donald Cammell only directed four films in his lifetime, committing suicide in 1996. All his films share one quality: they are extraordinary. His other films as director are PERFORMANCE (1970, co-directed with Nicolas Roeg), DEMON SEED (1977) and WILD SIDE (1995). WHITE OF THE EYE was his third picture and shares another quality with it's brothers: it too is one of the most under-rated and brilliant of it's decade (PERFORMANCE was completed in 1969).

David Keith (AN OFFICER AND A GENTLEMAN, 1982) is Paul, a sound expert (a la BLOW-OUT, 1981 and THE SHOUT, 1978) and creator of custom stereo equipment, living modestly in Globe, Arizona with his loving wife (Cathy Moriarty, RAGING BULL, 1980) and daughter (Danielle Smith). A similarly spirited cop comes to believe that Paul is actually a serial killer, responsible for a series of ritualistic and brutal slayings of women in and around the area, something Joan (Moriarty), Paul's wife, is finding very hard to reconcile with what she knows about the man she has been married to for a decade.
The movie is based on a 1983 novel called 'Mrs. White' by Margaret Tracy, actually a pseudonym for brothers Andrew Klavan (a double Edgar Award-winning crime novelist/ screenwriter) and Laurence Klavan (a playwright). WHITE OF THE EYE is mostly a faithful adaptation, with the subtle differences indicating Cammell's concerns and exhibiting the stamp of his signature. The chief difference is that the novel is mostly told from the POV of Joan.

Cammell came to the project after the collapse of a film he had been trying to make for over fifteen years: 'The Last Video' (Cannon shelved it after buying EMI). For most of it's inception, the project was entitled 'Ishtar' (don't confuse it with the 1987 Warren Beatty/ Dustin Hoffman 'comedy'), and had it been made during it's first pass, would've been his follow-up to PERFORMANCE, a film it seems to have shared distinct similarities with (according to Rebecca and Sam Umland's exhaustive 'Donald Cammell: A Life on the Wild Side', it concerned 'sexual identity confusion', a 'subversive artist-criminal', 'references to art...Blake...Borges' and revealed 'Donald's interest in art and architecture, as well as ancient cultures').

WHITE OF THE EYE is one of the most interesting and resonant entries in the serial killer genre. It's visually striking: the vast, barren landscape of Arizona evocative of Paul's barren psyche and his cruel acts of violence. Paul is the eagle that we see quite a few shots of in the film: high above everyone and everything and only stooping below to claim victims. The scenes of violence in the film are all the more memorable and disturbing because of their infrequency and lack of gore. Cammell seems more concerned with the aesthetic beauty and paradoxical artistic elements inherent in murder, and the destruction of the immediate environment (he edits such destruction in slow-motion). Cammell implies that despite it's obviously destructive qualities, even murder can be artistic. Humans cannot help but be artistic even when in the process of destruction.

The POV shots and scenes (seeing the murders through the 'killer's eye' view, actually co-producer Brad Wyman's eye, which have subsequently been done to 'death', and were arguably more effective in MANHUNTER, 1986 ; shots of 'the white of the eye') are unsettling and chilling, and all the more effective because of the subtextual level Cammell is also working on: like PEEPING TOM (1960), the audience and Cammell, the 'director', become voyeurs, the guilty parties, but Cammell is especially culpable, since like Paul, he is 'creating' destruction and at the same time creating his 'art'. It's a fascinating element to the film that separates Cammell from other gifted filmmakers like Bava, Hitchcock, De Palma and Argento. They were interested in the links between sex and violence, aesthetics and violence. Cammell is interested in the links between the artistic and killer impulses. The film's title also works on other levels: the dubious notion (attributed erroneously to the Apache in the film) that one can cast a spell on someone with 'the white of the eye' (something Paul does to win the love of Joan in the flashbacks) and that we can never know another person truly. 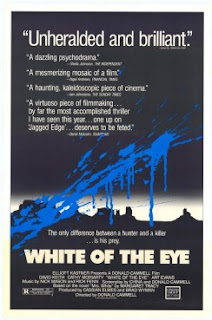 The film's most striking quality is it's quietness. It is a serial killer thriller, but this is no MANHUNTER or HENRY: PORTRAIT OF A SERIAL KILLER (1986, released 1990), despite similar killer POV scenes to the former and an understated, calm tone like the latter film. It's ostensibly a relationship drama tied to a police procedural thriller. The central family (Paul's) is convincingly presented, and the central relationship (Paul and Joan) seems very real; both being complex, multi-layered people. (It helps that, like all of Cammell's pictures, it's perfectly cast, with Keith at home in both his good-ole-boy and nutjob persona, and Moriarty at home being gutsy, vulnerable, streetsmart and sexy.) Paul isn't a perfect guy but he really does seem to be a loving father and loving husband. And indeed he is. For the main theme of the movie, as was the main theme in most of Cammell's work (and in his own life), is that of duality. In Paul's psyche exists the capacity for complete duality. He is a family man but also a killer who believes God has chosen him to put women out of 'their misery'. He is capable of great love for his family but also complete apathy for his victims (note how he loses himself to opera after one of his murders). He is an exaggerated version of the darkness that lies in us all, and Cammell implies that the hunter or killer instinct is closely allied to the artistic impulse. Note how the same drive that creates beautiful stereo equipment is also capable of murders that even the detective (Art Evans) compares to Picasso. His murders are as revealing of his psyche as the equipment he makes.

Cammell resists the temptation that many directors subsequently fell into (and Hitchcock in PSYCHO,1960 even did) - explaining the killer's psychosis. It's implied Paul's damaged psyche is genetic, as his father was a criminal and his daughter is already exhibiting anti-social tendencies. But Cammell doesn't take it any further, preserving the mystery.
WHITE OF THE EYE is pure Cammell: the wide variety of influences (opera, film, nature, art), the fragmented and disorienting narrative (there are frequent flashbacks to Paul and Joan's fraught courtship), the interest in duality, the strong female characters, the transcendence of genre limitations to a purely psychological level, the apocalyptic finale. And like all of his films, it failed at box-office, and was not even given a chance to succeed by it's distributors who simply dumped it into the marketplace. Cannon failed to show it at the Cannes Film Festival, a major oversight for a great work from a director making his first film in a decade (they even cut 6 minutes out of the film before it's release - mainly footage of Joan at work in a thrift shop). Significantly, it was the most well-reviewed of his films upon it's original release, if mainly in the UK (The Independent: 'a dazzling psychodrama'; The Guardian: 'a virtuoso piece of filmmaking'; The Sunday Times: 'a haunting, kaleidoscopic piece of cinema'; The Financial Times: 'a mesmerising mosaic of a film'). The MPAA saw fit to give the film an 'X' until Cammell's friend Marlon Brando stepped in, successfully getting the decision overturned to a more commercial 'R' after he wrote them a letter. (Ironically, Brando was responsible for giving Cammell a great deal of stress in his professional career, pulling out of and cancelling quite a few collaborations. One of them, 'Fan-Tan' was published in novel form in 2005.) Brando's description of the movie is a perceptive and fitting end to this review:

'(WHITE OF THE EYE is) a work of artistry and power, (throwing) a dark light on the essence of the most appalling variety of mental deformity known to our society: the 'motiveless' or 'serial' killer. ' 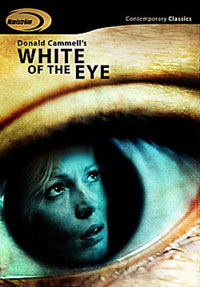 NB: Cammell intended to collaborate with producer Brad Wyman again, completing a script on the gangster Machine Gun Kelly. But the film was never made. The music score is by Nick Mason of Pink Floyd and Rick Fenn of 10cc. Paul's face paint at the end of the film is an homage to Godard's PIERROT LE FOU (1965). Cammell shot WHITE OF THE EYE in Globe, Arizona in less than six weeks (from January to March 1986) and for $2.5m. He co-wrote the screenplay with his wife China (Kong) Cammell.

AVAILABILITY:
WHITE OF THE EYE was available on VHS but has never been released on DVD, except in a dual Dutch/ Belgian edition, with a watchable but low resolution picture. It's in dire need of being remastered and being put out on a deluxe DVD/ Blu-Ray. Criterion, can you hear me?


SOURCES:
'Donald Cammell: A Life on the Wild Side' by Rebecca and Sam Umland, FAB Press, 2006.


Paul Rowlands is a Japan-based writer. After completing a BA Humanities course (majoring in English and Science) at the University of Chester, he moved to Japan in 1999. Paul writes for the James Bond magazine, Kiss Kiss Bang Bang, and has had an almost lifelong obsession with cinema, something the advent of DVD only increased. An aspiring novelist, short story writer and screenwriter, he has until now mainly wrote about film for his own pleasure, various blogs and for so far unpublished projects. Paul is also preparing his own short film, and has at least three writing projects in various states of completion.

Email ThisBlogThis!Share to TwitterShare to FacebookShare to Pinterest
Labels: Review: WHITE OF THE EYE