David Morrell is most famous as the creator of John Rambo, the traumatized Vietnam vet anti-hero of Sylvester Stallone's hugely successful five-film franchise. He first introduced Rambo in the acclaimed 1972 novel First Blood, published whilst he was a Professor in the English Department at the University of Iowa. Morrell also wrote the novelisations for RAMBO: FIRST BLOOD, PART II (1985) and RAMBO III (1988). He is also the writer behind over thirty bestsellers, encompassing many genres - titles that include the spy novel The Brotherhood of the Rose (1986), which was adapted into a hit 1989 TV mini-series starring Robert Mitchum; the creative fiction memoir Fireflies (1988), inspired by the passing of his son; the comic books Captain America: The Chosen (2007-08), Spider-Man: Frost (2013-14) and Savage Wolverine: Feral (2014), and his latest works, the Victorian mystery thrillers Murder as a Fine Art (2013), Inspector of the Dead (2015) and Ruler of the Night (2016), all featuring the real-life literary figure Thomas De Quincey. Morrell has 18 million copies of his books in print, and his books have been adapted into 30 languages. In the second part of a two-part interview, I spoke with Morrell about how he feels about the FIRST BLOOD (1982) movie, and the differences between the film and the book; his opinions on the William Friedkin movie THE HUNTED (2003), which bears similarities to First Blood; his experiences writing Captain America, Spider-Man and Wolverine comic books and how similar they are to writing movies; his latest book, the short story collection Before I Wake (2019); and his love for the Quentin Tarantino film ONCE UPON A TIME IN ... HOLLYWOOD (2019).
Part one of the interview.
What do you know about an apparent rough cut of FIRST BLOOD that Stallone is supposed to have hated so much that he wanted to bin the film?
The first assemblage of FIRST BLOOD was long, with flashbacks. That’s probably the version he’s talking about. Eventually the film was cut to around 95 minutes. I never saw the original version, but I gather there’s quite a difference. LAST BLOOD is about 86 minutes, but it feels much longer. Interestingly there are 2 versions of LAST BLOOD. The one shown in Europe and many other international markets is around 12 minutes longer than the one shown in the United States. The overseas version starts with a half-successful rescue in a flash flood. The American version starts immediately in the tunnels, with Rambo swallowing pills. I think the US version would have benefited by showing immediately that Rambo could be a hero.
I actually spoke with Ted Kotcheff about the movie and his career.
Ted did a great job on FIRST BLOOD. Andy and Mario always hired the best people, from Jerry Goldsmith for music to Andrew Laszlo, who lit the cave sequence with a few matches! I admire how that picture was put together. First rate.
How do you feel about FIRST BLOOD as an adaptation of your book?
If you're going to be in the movie business, you need to realize that books and movies are different ways of telling stories. What works in a book won’t necessarily have the same effect in a movie. For me, the strength of the book is the alternating emphasis on Rambo and Teasle as equal characters who refuse to understand each other. When the book was first reviewed in the early 70s, many reviewers couldn't decide who the main character was. That was the point. Both were the main character.
In my novel, Teasle is old enough to be Rambo's father, so there’s a generational aspect to the story. In the film, the actor playing Teasle, Brian Dennehy, is roughly the same age as Sly, and that makes them like brothers, not father and son. That changes the interpretation of the story, but it still works. It's just that it's different. Before the film went into production, Andy Vajna called me and said, ‘’For budget reasons, we’re going to move the setting from Kentucky to the Pacific Northwest. Will the plot still work if we do that?” My answer was that there wouldn’t be a problem with the change. "It'll be different, but it'll work. ''
Another key change from the novel is that Teasle’s role is lessened in the movie. A critic commented that it seemed as if a redneck police chief from the American South was on sabbatical in the Northwest. The role reeks of stereotype, but Brian is so brilliant an actor that he found ways to make it fresh. One key to the character in the book is that he’s a decorated veteran from the Korean War. He thinks he understands combat, but he was never encountered a guerrilla fighter. That's a major point in the novel – traditional war versus guerrilla war. In the film, the only remnant of Teasle’s military background is a display of medals behind his desk.
Regardless of these differences, I think the film adaptation works splendidly. I discuss the novel and the film on my audio commentary for the Blu-ray version of FIRST BLOOD. Also there’s a RAMBO page on my website, that has a long Q and A about the character’s background. Rare photos and posters are on that page also.
What did you think of the William Friedkin film THE HUNTED? It's very similar to the FIRST BLOOD film and book.
Yes, it's more or less the same, isn't it? I attended a Blade Magazine event at the time THE HUNTED was released. Someone associated with that film was there. I went over to him and said, ''Hi, I'm David Morrell. I created the Rambo character.’’ He turned pale and got out of the room as fast as he could. 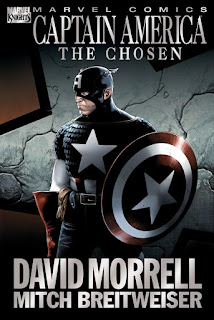 You have also written comics for Captain America, Wolverine, and Spider-Man. Did you feel like you were in a filmmaker's shoes given that comic books are a visual medium?
Comics are absolutely a visual medium. Marvel sent me some sample scripts from other series, so I could learn the format. Those scripts reminded me of storyboards for a film. It's stop-action storytelling. The gap between the images—the jump—is hugely important. That gap provides the drive and the propulsion for the story. I thought, Wow, I can be the director. I can describe the angle from which the reader is viewing the image. I can describe everything that's in the image. I can even suggest the colors. '’ A comic-book writer is also the director, cinematographer, set designer, and editor. It’s a wonderfully creative medium, involving at least three people: a writer, an illustrator who interprets the script, and a colorist who makes it vivid. The collaboration is fascinating. On the Writing page of my website, there’s an essay about how I wrote Spider-Man: Frost and worked with legendary artist, Klaus Janson. Anyone interested in writing comic books will find it informative. There are script pages that provide an example of the format.
Do you enjoy dropping into different formats of writing?
Because I'm always interested in technical challenges. I love different kinds of writing, trying to get to the core of them and reinvent them. If somebody would allow me, I'd write a Broadway musical. I write non-fiction and have a writing book The Successful Novelist, for example. I've written thrillers, mysteries, horror, Westerns, historical novels like my Thomas De Quincey Victorian stories, short stories, movie scripts, even liner notes for DVDs and CDs. One thing I always ask myself before I do something is how I can make it technically interesting. 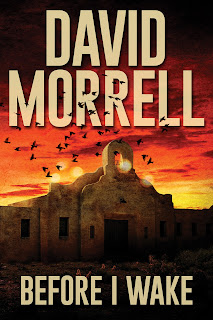 Your latest book is a collection of short stories, Before I Wake.
It contains a Western and several historicals, including one that’s set in WW2. That story is about the French Foreign Legion, which was split in half during WW2. One side was loyal to Britain, and one was loyal to Germany. At one point in Syria, they had to fight each other. They knew each other, had trained together, and now had to kill each other. There's also a Sherlock Holmes tale in the book, and also some Ray Bradbury and Rod Serling Twilight Zone type short stories. The publishing world has changed drastically, to the point that there’s no mass market for story collections anymore (unlike my two previous collections), so I chose a collector's publisher (Cemetery Dance) that specializes in exclusive, numbered, signed hardbacks. There’s also an audiobook and a large print library book version.
I've noticed online that you are a big fan of Quentin Tarantino's ONCE UPON A TIME … IN HOLLYWOOD. I was wondering why you are so fond of it.
I'm obsessed by the dizzying self-referential “meta” in it. Tarantino convinces me that the character Rick Dalton is a real actor, who played a character named Jake Cahill in a non-existent TV series called Bounty Law that somehow seems real. Tarantino also makes me believe that Rick’s stunt double, Cliff Booth, is a real person. The film has fake posters for non-existent Rick Dalton films. I collected them – Nebraska Jim, Hellfire Texas and so on. I wrote an essay about the meta in the film. It includes many of the fake posters. ONCE UPON A TIME IN ... HOLLYWOOD is a movie about movies. That technique adds an extra depth that I try to include in my own work. For example, Murder as a Fine Art is an imitation Victorian novel that could have been published in 1854.
David's website. The site has links to sites where you can order his books.
His new book, the anthology Before I Wake, can be ordered here.
The Rambo films are all available on disc and digitally.
Copyright © Paul Rowlands, 2020. All rights reserved.
Posted by Paul Rowlands