IN SATURN'S RINGS is a new large-format film from Stephen van Vuuren that celebrates the Cassini-Huygens space mission's arrival on Saturn through the use of 7.5 million photographs taken during the mission. It is an immersive, hypnotic 45-minute experience, set partly to Samuel Barber's Adagio for Strings, and the film inspires a sense of wonder that is something to behold. In the second part of a two-part interview, I spoke with van Vuuren about how musician Bryan Adams became involved with the project, what he learned from the experience of making the film, the kind of reactions he would like from audiences, and his thoughts on the level of public interest in space exploration.

Bryan Adams' music video Please Stay, which he also directed, incorporates footage from IN SATURN'S RINGS. How did this come about?
I guess the power of Google! In the Fall of last year I was just sitting here working on the film as usual, and an email came in that said it was from Bryan Adams. I'm embarassed to admit how close I came to deleting it, thinking it was fake. It said ''Hi Stephen. This is Bryan Adams. I came across your footage. It's beautiful, and I would like to use it in a music video that I am directing. '' It was signed Bryan Adams, Singer/ Songwriter. I thought ''There's no way that's real'' and my finger hovered above the Delete button. But luckily I decided to check the domain and the IP address, and also his website. I'd been a huge fan of his as a kid in the 80s but I had no idea what he was doing today. He is actually a great photographer and has an extremely keen sense of visual composition. I replied to the email, thinking it had probably come from his assistant. He replied promptly and we began having an exchange. Both him and LeVar Burton were everything you would want them to be - super nice and super professional. Bryan Adams shared the trailer to film on his social media accounts and that helped us to get a little bit of a kick-off. He didn't send us the song beforehand so I was nervous, not knowing how it was going to turn out. But I loved the song, and what he did with the images in the video was really cool.

It sounds like it has been a real journey making this movie.
It has been! I didn't wake up one morning thinking ''I'm going to make an IMAX film. '' In fact, making it an IMAX film wasn't even my idea. That was due to a chance meeting with someone called James Hyder, who wrote for LF Examiner, which is the trade publication for the large format film industry. I was just going to make a ten-minute film that would play on the film festival circuit, but I had a chance meeting with him in Las Vegas, of all places, and he said to me ''Most people who want to make a film for the giant screen, I tell them not to. But you have to make this film for the giant screen. '' I told him he was crazy because it was too high resolution and I couldn't do it. But after the long journey, here we are.

What have you learned the most from working on this project?
I think the thing I have learned the most is that, as I read or heard somewhere, ''Do what you love. '' If you do that, it will resonate with other people. When I released the first clip from the film, of the one minute fly-by of Saturn set to Adagio for Strings, it sat up on Vimeo for nearly a year with only a hundred or so views, mostly from my family and friends. People would say ''Adagio for Strings is not a good choice. It's been used in other movies'' or ''You should use CGI. It's sexier. '' I remember thinking ''Alright, I'm the only person that thinks this is interesting. '' I seriously considered moving on to something else. But then it went viral and everything changed. After that I met a lot of volunteers who also thought it was fun to create something beautiful that you could share with other people.

What kind of reaction would you like to get from audiences as they leave the theater?
I hope people have a variety of reactions. I would certainly hope that if people were leaving the theater at night, the film would make them look up to the sky. And that that would lead them where they may – perhaps to realising how disconnected we have become from our universe. I tried to provoke that response through not only the narration but also the camera motion which went forward and upward. Part of the design was to get people moving up and out, rather than down and in. That's why I decided to do that time lapse of people with their phones, because when you look at people when you're travelling you see so many people looking down and hunched in with their phones or devices. The irony of course is that without the Internet, this film would have been impossible! 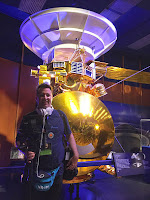 I guess the rise in popularity of technological devices requires a shift from people like us too though. A colleague of mine watched LAWRENCE OF ARABIA (1962) on her cellphone, which I thought was crazy initially, before I realised ''At least she's watching the film!''
I was flying back from the LeVar Burton recording sessions and there was a person next to me watching DUNKIRK (2017) on her iPhone. I was glad she was watching a great film, but as David Lynch would say, ''You think you've seen it, but you haven't seen it!'' And this was the passion to make IN SATURN'S RINGS. People have seen photographs of Saturn's Rings, but when you are experiencing it on a giant screen, you will see them very differently.

10 years from now, where would you like the US to be in the field of space exploration?
Cassini was what is known as a flagship mission to the other planets, and there are currently no flagship missions that are funded and are going to happen. But in ten years time I would like something to change so that we have flagship missions to every planet. That would be my dream. I think our chances of finding something to change human history would be pretty good. JPL let me have the great privilege of winessing Cassini's grand finale, and I had the opportunity to talk to exobiologists and people who have seen and dealt with the deepest research. I asked them straight out ''What do you think are the chances that we will discover some kind of other life form?'' With what they are seeing from the chemistry and composition and comparing it to places where they have found life in harsh conditions here on Earth, they all responded with ''We have a pretty good chance. '' It would be my dream to have the question about the existence of other life forms answered.

How would you like the level of public interest to change?
I would love for everybody to find more purpose in space exploration. This is how humanity rose and became civilised – through exploration and discovery. We have stalled. The iPhone is an incredible invention but if that same level of invention was applied to exploration and discovery, I think we would be much farther than we are today. It shouldn't be about ''What should we invent next?'' but ''Where are we going to go next?'' Exploring and discovering is the core of our nature. And also, we have billions of people on the planet and all these diminishing resources and this is what should motivate us, like it has done in the past, to move on to new places. It's the ultimate answer to poverty and starvation. Enough people, like Elon Musk and Jeff Besos, believe in exploration that perhaps in twenty years or so they will finance their own space missions if the government can't or won't.

How can people see the movie?
Most of the large format theaters are privately owned, and they show the same movie for two or three months at a time, so IN SATURN'S RINGS will have a slow rollout, theater by theater. The distributor has to approach each theater and negotiate the run one at a time. It's a different and strange industry compared to regular theaters. The Full Dome version of the film, which is made for Dome theaters and has a screen that goes 360 or 180 degrees over, will start rolling out later this year or early next year. There is a two or three year window where the film will slowly make the rounds theatrically, and about a year from now there will be a Blu-ray and a 4K Blu-ray, and maybe even 8K streaming. People can check venues and dates where it will be playing at the website for the film.

The website for IN SATURN'S RINGS where details about the film and the screening dates and venues can be found.

Email ThisBlogThis!Share to TwitterShare to FacebookShare to Pinterest
Labels: Interview: STEPHEN VAN VUUREN ON 'IN SATURN'S RINGS' (PART 2 OF 2)