Simon West is one of the film industry's most accomplished action directors. Already one of the most exciting and in-demand music video and commercials directors, West made his feature debut with the much-loved CON AIR in 1997, and in the two decades since has helmed such productions as THE GENERAL'S DAUGHTER (1999) with John Travolta; LARA CROFT: TOMB RAIDER (2001) with Angelina Jolie; THE MECHANIC (2011), THE EXPENDABLES 2 (2012) and WILD CARD (2015), all with Jason Statham; STOLEN (2012), which reunited him with CON AIR's Nicolas Cage; the new action comedy GUN SHY (2017), with Antonio Banderas (now out on Blu-ray and Digital), and his latest release, the back-to-basics action thriller STRATTON (2017), which features Dominic Cooper in the title role as a Special Boat Service Agent on the tail of an international terrorist. I spoke to West about STRATTON, the 20th anniversary of CON AIR, and BLACK HAWK DOWN (2001), which he executively produced.

What attracted you to STRATTON?
I had been looking for about five years for a new British hero in the action world who would be attractive internationally. We have Harry Potter and we have James Bond, but I felt there was a gap in the market for a third one. I didn't know whether he would be a detective or a doctor or a superhero. Then I got sent the Stratton books by Duncan Falconer, which were about the Special Boat Service, the Special Forces unit of the Royal Navy. I suddenly realised that this was a world we haven't seen on film. Nobody really knows what kind of missions they do because they are so secretive, but they are much more low-key than the Navy SEALS or the SAS. When I met Falconer, who had been a commando in the SBS, I got even more interested because he would tell me stuff that wasn't even in the books, and it was all fascinating. These guys are really interesting characters because they are not big, musclebound action men. They are much more in the background. Actually they are more like what Bond is for real, because spies don't really do all the action stuff. Spies gather the intelligence and when they need someone to kick a door in they call in Special Forces, rather than the SBS. I thought a much grittier, realistic version of Bond would work. It's much more Gillespie and the Guards and a dynamic of working together.

Why did you choose to cast Dominic Cooper in the lead role?
Dominic has incredible range and is a great character actor. He went from THE DOUBLE to singing in MAMMA MIA and then playing a psychotic priest in the Preacher TV series. He can do anything. Dominic is also great because you wouldn't necessarly expect him to be an action man. The motto of the SBS is 'By strength and guile', guile being their big thing. Not one person is the same in the SBS. They're all specialists. They're not actually trained. They already have the aptitude for the job they are selected for. It makes for an interesting, rag-tag, unusual group of people, and they never write books about their exploits. The Stratton books are fictional stories. Dominic was really interested in transforming into this guy, Stratton, who is great at his job but not that comfortable at home or on the street. It's all a bit confusing to him, and he'd rather be out on a mission because it's easier for him.

How did you keep the action fresh on STRATTON?
It's hard. I get bored watching action films if there isn't a fresh take to the action. I made sure there was a good story and a good structure, and that the action was not just there for its own sake. It took months and months in pre-production of putting clay into the sculpture and playing with it, trying to find twists to the action. We would know the basic gist of an action scene, and what obstacles the good guys would face, but then we would think about what latest equipment they could use, and how we could use it to subvert the action. We become like evil masterminds, looking for weaknesses in security systems and so on.

Do you prefer action that is more tactile and visceral?
Yes, I like to be able to follow the action, and I like it to be clever, so that the audience doesn't feel its intelligence has been insulted. I don't want them thinking ''Oh, that would never happen. '' Unfortunately, courtesy of CGI, anything can happen in movies nowadays. I try to do my action in front of the camera and for real as much as possible. I think people appreciate it if you do something spectacular but also for real. With CGI it becomes more like fantasy and it easy to become detached. 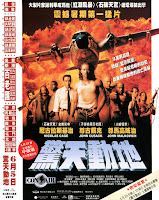 It's now twenty years since CON AIR was released. Looking back on it, was it daunting making an epic film like that with such strong actors for your debut?
I went in with a lot of naivety, which is probably what got me through it. You have no idea how difficult it was to make, physically and logistically and being with that many actors. I got through it by not knowing how hard it was going to be. It was only halfway through that I realised ''This is really an impossible task. '' Yet somehow I got through it with energy and endurance, plus I really loved the characters and the writing and the story. I learned so much on that movie, so my next film, THE GENERAL'S DAUGHTER, was easier. CON AIR was a ridiculous film to make for your first one! I can't believe the studio and producer Jerry Bruckheimer let me direct it. They were so brave, some would say foolish! But luckily we got away with it.

Are you surprised the film is still in the public's consciousness?
I am pleasantly surprised, although I will admit that I do try to make my films timeless. I want people to be able to watch my films five, ten, twenty years later and not feel they are dated. That film is unusual in that it still plays on TV all the time and people seem to like it. People have a nostalgia for it, and also new people discover it.

You're developing a new project, Thunder Run, with screenwriter Ken Nolan, who wrote BLACK HAWK DOWN, a project that was originally yours. Was that a big regret not getting to direct that film?
I'd have loved to have made the film, but it was a scheduling issue. I was still finishing TOMB RAIDER, and BLACK HAWK DOWN had to go into production because of the SAG strike coming. I had found the original project and spent two years working on the script with Ken., so I had a lot invested in it. If it hadn't happened then, it probably wouldn't have gotten made. That's why I'm so keen on Thunder Run, which is like BLACK HAWK DOWN but with tanks and set during the Iraq War. I'm hoping to make it next year.

STRATTON will be released by Momentum Pictures on January 5th on demand and in select theaters.

The trailer to STRATTON.