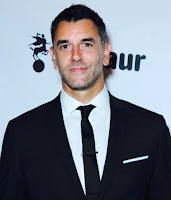 Richard LeMay is the director of the gay-themed dramas 200 AMERICAN (2003), WHIRLWIND (2007) and NAKED AS WE COME (2012), and the forthcoming horror films DEMENTIA 13 (2017, a remake of a 1963 Francis Coppola film) and BLOOD BOUND (2018). Le May also produced CHILDREN OF GOD (2010) and directed episodes of the TV series The Mind of a Murderer.  I spoke with LeMay about making the transition to horror films, the horror films he admires the most, how he approached remaking Coppola, and what we can expect from BLOOD BOUND.

What made you decide to make the transition from dramas to horror movies with DEMENTIA 13 and also the forthcoming BLOOD BOUND?
I've always wanted to do horror. It's my favorite genre. In the past, I had toyed with other horror stories but never committed. I think that there's a certain amount of technical skill as a director on a horror film that I didn't feel I had at the time. But currently, I'm really excited to be working on the projects I have now. And there's a few more horror movies coming up as well.

In what ways was adapting to a new genre a challenge?
I don't think there was any thought to adapting to a new genre. I look at all movies as dramas, even comedies. I think that if your feet are planted on the ground in whatever reality you create, then it's good storytelling. For the characters in DEMENTIA 13, they are really just a disfunctional family dealing with their own personal stuff. What happens to them as the film goes on is the horror element. I think the best horror movies play like a drama that gets out of hand.

What are some of the horror movies you look up to the most?
I'm a huge horror fan, and always have been, since I was a kid. I think for me, movies like ROSEMARY'S BABY (1968) and THE EXORCIST (1973) are timeless. They play like a period piece and not an outdated movie. There was also THE BELIEVERS (1987)  from the 80's, starring Martin Sheen which creeped me out. I think all of the classics have a genuine dramatic arc to them. That's why we connect to them beyond just the scares. The same goes for current films like THE WITCH (2015) and IT COMES AT NIGHT (2017). These are stand outs in the genre.

How familiar were you with the original DEMENTIA 13?

I wasn't familiar with the original. Dan De Filippo brought me to the project and got the conversation going with Chiller Films about making the film. After that I watched the film a couple of times.

What interested you the most about remaking it? In what ways did you want to make it a different experience or expand or subvert against expectations for audience members familiar with the film?
I think that besides the fact that a legend made the original, I thought that the script was fast paced and kept you guessing. I like that. As far as intentionally setting out to subvert expectations for audiences, I just wanted to make a good film. Let's be real, Francis Ford Coppola made the original. I'm never going to out-do him. I idolize him, so I knew that if I got to direct this, I would try my best to do it justice. And I think that was the general intention for all of us on set, just respect the original and still try to put our stamp on it. There are many nods to the original as well, so hopefully fans will get a kick out of that. But I do think there are some new elements to the remake that will make people jump.

Did you want to introduce more humor to the new version?
I think there's a lot of humor in family dysfunction. For me, that's the humor. There comes a point in the film when nobody's laughing, so in the beginning we definitely tried to lighten it up.

Was it always your intention to retain the title of the Coppola film?
Yes. I feel like, if you're going to do a remake, you might as well embrace the original title.

You are known for your acclaimed dramas that focus on gay characters and themes. How do you feel the representation of gay-related stories and the audience for them has developed in the mainstream over the years following your films and other films like BROKEBACK MOUNTAIN (2005)? Is it your hope that eventually such stories will find more of a place or even more of a place in the mainstream and be seen as universal stories as well as gay stories?
Good question. I think the current climate in film and television is light years away from what it was 20 years ago. I think the mainstream has opened much wider in the last 10 years to stories of all walks of life. Yes. I think at the end of the day, we are all people. There's only so many times you can tell ROMEO AND JULIET. Eventually, it won't even be an issue, especially with the kids these days. They are so much more open and accepting. It's definitely a different world than when I grew up. So I do believe that in the not so distant future, there won't be much of a distinction between gay/straight film content.

What can you say about BLOOD BOUND, and do you see yourself continuing in the horror genre in the near future?
BLOOD BOUND is a story about a family of witches who come to a small, rural town to perform an ancient ritual. It's starring Eden Brolin (I DREAM TOO MUCH, the TV series Beyond) and Eric Nelsen (A WALK AMONG THE TOMBSTONES, THE BAY). I can't say enough about this project. The cast was unbelievable. I think people are going to be blown away by Eden Brolin's performance. But it's a creepy, dark story with a few surprises at the end. I just completed that film, so expect to see it next year. Next up is a horror film called DARK HOLLOW. That's in developement now. I also just finished my first novel Wrightsville, which is not horror, but it's a wild ride. I just feel fortunate to be able to work on projects I love. Exciting stuff.

DEMENTIA 13 will be released in theaters on October 6th, and on VOD and Digital HD on October 10th. BLOOD BOUND opens in 2018.

The trailer to DEMENTIA 13.