AN INTERVIEW WITH MICHAEL MORIARTY (PART 2 OF 2) 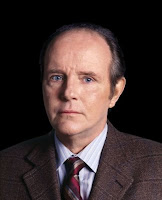 Michael Moriarty was one of the most versatile, fascinating and idiosyncratic young actors to emerge in the 1970s. Since then he has built up a catalogue of compelling performances that always emphasise the humanity and soul of his characters, and the universal nature of their struggles. As powerful and as acclaimed whether he is working on the stage, the big screen or the small screen, Moriarty's later films include Bigas Luna's  REBORN (1981) with Dennis Hopper, four projects with Larry Cohen, Clint Eastwood's PALE RIDER (1985), Mark Rydell's JAMES DEAN (2001), his passion project HITLER MEETS CHRIST (2007) and four hugely successful years (1990 -94) as Ben Stone on the TV series Law and Order, for which he received four separate Emmy nominations. In the second part of our interview, I talked with Michael about these projects, and others, and also about his deep interest in music and politics.

Part 1 can be read here.

One of your most intriguing projects is Bigas Luna's REBORN with Dennis Hopper. What was the most memorable thing about working with Hopper?
Just his midnight addiction to loud rock music in a dingy little motel we were staying at in Texas. ''Could you tone it down, Dennis?'' ''Sure, man, yeah… no problem!'' 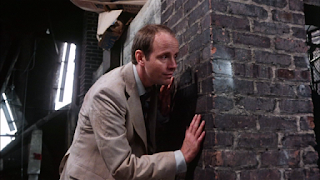 Did you have a good working relationship with Larry Cohen on Q (1982)? It led to THE STUFF (1985) IT'S ALIVE III (1987) and PICK ME UP (2006).
Larry pushes everyone because of the limited budgets but he’s always funny. He could always get me laughing into one more take! Lotta hard work, mainly because of the budget, but I loved making it.


Do you have to adjust your performances at all when you are making more fantastical films?
I’m allowed to be a little broader with my characters than in other films – beside, when Larry shows you how he wants the scene done, you think he’s directing a silent film. It’s that big.


How was working with Clint Eastwood on PALE RIDER?
Clint Eastwood doesn’t so much direct as set a style of working, and things just seem to run along as if by magic. 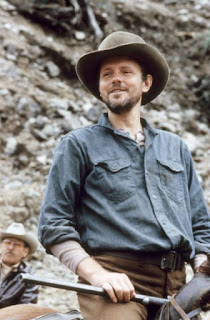 Was Eastwood someone you already admired?
I certainly admired him after working with him. His production crew and assistants make it all look like falling off a log. This cannot happen without an undeniably great leader at the head of things. The shoot was almost a vacation in Sun Valley.


What was the biggest joy of playing the same character in Law and Order across four years and 88 episodes?
I’ve never been more certain of a character. With that certainty, some days were the best in my professional life. I’d never had a role so tightly tailored to myself and it only became closer, more credible and more realistic as we went.


What was the most challenging or stressful aspect?
Shooting outdoors on the Manhattan piers in the winter. If felt like Chicago on Lake Shore Drive in January.


Which episodes were you the most proudest of?
There were too many of them, particularly as the years went on. Once Dick Wolf told me that I had become ''the conscience of the show''. I was more than just an actor. I was a silent force on the entire show’s direction. 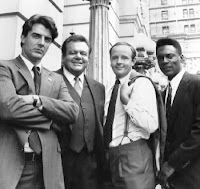 What led to your departure from the show?
I had decided to leave America around the end of that time. Both the East and West Coasts, meaning New York and Hollywood, ostracized me after my public indictment of Attorney General Janet Reno. I put an ad announcing my departure in both the Hollywood Reporter and Daily Variety. It was fascinating, after that, to watch NBC and Dick Wolf announce to the world and Wikipedia that I was being fired for misbehaviour on the set when I’d already told the world I was leaving the United States. Of course, Wikipedia’s version is NBC's version. Wikipedia never asked me for an interview.


What was your Emmy-winning collaboration with Mark Rydell like on JAMES DEAN?
He was a wonderfully supportive director! Enjoyed the whole experience.

Do you enjoy playing small supporting roles in big films like ALONG CAME A SPIDER (2001) and COURAGE UNDER FIRE (1996)? Do such roles require a different kind of preparation and focus?
I do them for the money. You just have to be as unobtrusive as possible and just 'get in and get out'!


What was the genesis of your play 'Hitler Meets Christ at the Port Authority Bus Terminal', that led to the film HITLER MEETS CHRIST that you wrote and acted in?
It was as wide and deep a dichotomy as I could think of - God and the Devil - and then see what happened on the typewritten page.

How important was the project to you personally?
It became sizably more important after Eli Wiesel attended a reading of it and he told me that I may be more well remembered as a writer than an actor.


In the 90s you formed your own political party in Canada. What brought that about?
It was only for about ten seconds. It was too many glasses of wine that brought it about.
Have you always had a big interest in politics?
After watching Attorney General Janet Reno bully about four or five NBC Network producers, I became ferociously interested in American politics.


Has your interest in political and social issues informed your choice of roles?
Ironically I don’t think so. Besides by the time I left for Canada I couldn’t wait for retirement.


Did it hurt your career in any way?
Absolutely. But the involvement came, however, ten years before the end of my career and I found enough work during that time to stay alive.


Your first love is music. What do you get out of writing music that is different to acting?
It has no verbal complications to interrupt or to try and direct its flow. It’s a river! Not a poem or a book or a novel. The work I’m proudest of, my symphonic music, has yet to be performed live. Life is best when you have the best to look forward to, even if you’ll see and hear your favourite creations performed while on 'The Other Side'. 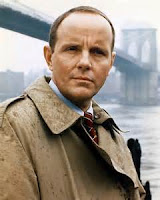 Now you have reconnected with your love of music, what does it mean to your life now?
My sanity. The world has grown so insane! It’s not that I don’t know what is going on. Good and Evil. Comic book stuff. My emotional response to it all, which for me is more important than any intellectual thoughts I might have, is all contained in my symphonies. I’m surprised at the opera, Prelude, that is slowly but steadily evolving on my music pages. Too much theater, I guess, to have entirely excluded it from my music.


When you look back at your career, what are the overriding emotions?
Massive gratitude to God! A great life! I only pray for at least another 9 or 10 years to complete a sufficient body of work as a composer to eventually, after my death of course, be taken seriously. I had a period of The Public’s interest in my chamber music in New York: both with Nina Beilina’s orchestra and the Soviet Emigré Orchestra. Once in Canada, the Calgary Symphony Orchestra gave an outstanding performance of my Symphony For Strings to a very respectful review in the Calgary Sun. Though I have obviously drifted out of sight, it is the best condition for my composing. Too much time would be taken up traveling and attending performances if I were back in the public eye. Life, despite appearances, is PERFECT! Good and Evil, in one form or another, will always be with us. We’re obviously put on this Earth to get acquainted with both.


I spoke to Michael by email during September and October 2015 and would like to thank him for his time.

Email ThisBlogThis!Share to TwitterShare to FacebookShare to Pinterest
Labels: Interview: MICHAEL MORIARTY (2 OF 2)