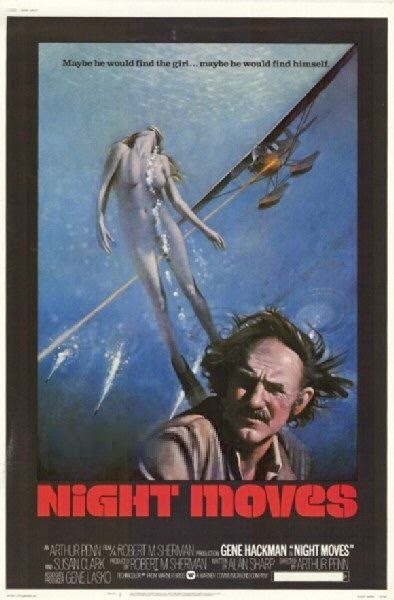 Arthur Penn solidified himself as an American auteur with such cinematic landmarks as BONNIE AND CLYDE (1967) and LITTLE BIG MAN (1970). NIGHT MOVES, starring the incomparable Gene Hackman, deserves a reexamination. It can easily be mentioned alongside other neo-noir classics like CHINATOWN (1974) and L.A. CONFIDENTIAL (1997).
With a lead detective character that’s subjected to obstacles that might seem alien to such noir regulars as Sam Spade and Phillip Marlowe, Harry Moseby (Hackman) escapes the troubles of his failing marriage with Ellen (Susan Clark) and throws himself headlong into a convoluted international case. A former movie star, Arlene Iverson (Janet Ward), with more than just fading glamour, puts Moseby on her payroll to track her missing daughter, Delilah (Melanie Griffith), whom she envies a great deal for her sexual prowess. Haunted by his wife’s philandering with a handicapped Marty Heller (Harris Yulin) the chess-obsessed detective buries himself in this case that brings him to the Florida everglades. It's there that he encounters an inappropriate 3-way relationship between Delilah, her stepfather Tom Iverson (John Crawford) and the troubled nomad Paula (Jennifer Warren). Between his own fractured home life and an intricate international smuggling plot that complicates the initial mystery of this missing-persons case, Harry Moseby soon puts himself in a situation that throws him into an identity crisis, while also provoking grave danger.
With the advent of the neo-noir genre came a string of ambitious filmmakers who opted to break some of the long-standing conventions that had lingered on in hard-boiled detective films. THE LONG GOODBYE (1973) placed old-fashioned Philip Marlowe in an alien society with hippies and marijuana. THE LATE SHOW (1977) (which I coincidentally saw on a double bill with NIGHT MOVES at The New Beverly) toys with the familiar idea of a detective’s loose-non committal sexuality, and gives the protagonist a more paternal relationship to the female character, as opposed to a lusty one. The film offers something rarely seen in a hard-hitting detective movie: a man who wants a happy marriage but is distraught by his wife’s infidelity. In the confines of his own home, Harry deals with more psychological difficulties than on the job as he verbally spars with the woman he thought he could trust. She reveals her resentment for him not fulfilling his own true potential and being uncommunicative about his childhood vulnerabilities. The sound and set design prove to be a great asset in this simple setting. In one scene a garbage disposal that gratingly grinds up broken glass, mirrors the nature of Harry’s fractured jagged thoughts (Ellen: “Can you turn that thing off? I can’t hear myself think!” Harry: “Lucky you.”) The small TV tucked away in a hidden room quietly broadcasts a professional football game to constantly yet subtly remind our hero of his dead dream of being a powerhouse athlete. These little touches far outdo other noir classics in terms of providing backstory to the protagonist and giving him some semblance of motivation. It is a calculated genre pot-stirrer that nullifies any pre-conceived notions of the classic authority figure that is irresistible but cold and a mere machine of unbiased justice. It is this relationship-based part of the story that might be deemed a non-essential subplot for a lesser detective movie but actually holds more interest for me than the convoluted mystery itself. 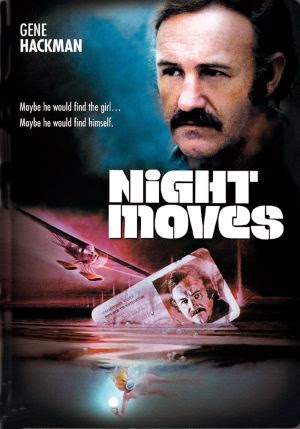 Of course the film isn't totally unbalanced to the point where the mystery is not at all compelling. The unorthodox relationship between Tom Iverson and his stepdaughter Delilah is undoubtedly sickening but Tom’s humanity also shines through in taking the troubled Paula underneath his wing after an upbringing of abuse that led her to part-time prostitution at one point in her life. He has conflicted feelings about his own ethical boundaries in courting the young siren, Delilah, but gets emotionally attached. He also unintentionally drives Paula to escape the torment of the disjointed romance through alcoholism, all the while he not-so-secretly engages in criminal activities. It is a disorderly union that’s not ideal by any standards. But the odd “family” also serves as a frank conversation-starter about societal sexual mores especially at the time of the film’s release in the mid-70s. After all this was the era of free love, when ideas of monogamy and commitment were being greatly challenged. The good and bad dynamics of such a loose relationship is put on display here as each party's conflicted emotional state is brought into full focus. A strangely erotic yet pathetic dance scene that happens mere minutes after a shocking discovery communicates the ever-changing libidinal drives of the four characters involved with great succinctness and uncomfortable humor.
This bizarre encounter even allows Hackman’s character to do some sexual exploration himself. Moseby's initial outrage at his wife's cheating followed by his eventual one-night stand with love-lorn and unsure Paula is simply put, a heart-broken rebound effort. But with further examination this instance of the film yet again holds a mirror up to our ingrained societal practices. The brief affair asks the question: did such a tryst that would be otherwise frowned upon, in a way, help his failing marriage and aid him in realizing his true full potential?
As if not enough uncharacteristic detail is given to Moseby's backstory, the film also expounds upon his twin obsessions with chess and football. Throughout the film, Harry is constantly poring over a chess board in various situations to relive a famous tournament in which a world-class player made a simple but game-losing mistake. Looking at the strategies that happened to lead to such a terrible loss metaphorically draws comparison to the way he planned out the battles in his own life. He’s no doubt thinking about what simple thing he could have possibly done to avoid losing his domestic happiness. The mentions of his former athletic football prowess on the football field cause his eyes to light up at a more glorious yesteryear. The reminiscences of his robust youth shed more light on his current state of existential angst. He lives an unfulfilling life where he brings only cursory fulfillment to strangers. 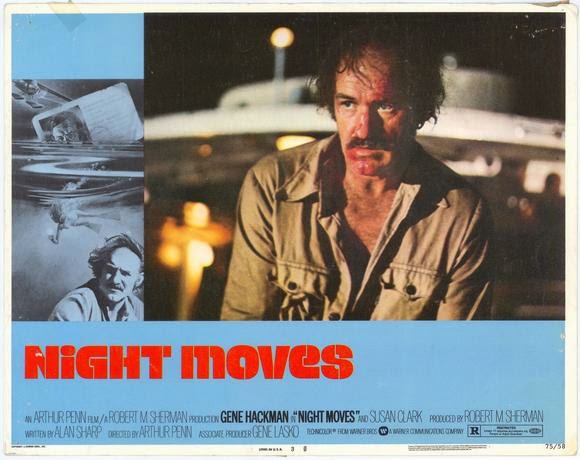 Gene Hackman doesn't make one false move in this masterful performance. He allows the audience to see a calculated measure of his inner turmoil. He puts up just enough of a steely reserve to communicate that he has the implied emotional toughness to succeed with such a difficult job but also can’t hide a softer side. An intimate moment between Harry and Ellen, where he desperately fights the instinct to cry while talking about his father prompts his wife to plead for him to succumb to his emotions and let loose the tears for the sake of their communication, which will in turn salvage their relationship. It's to the benefit of the movie and his performance that we see his weeping as an underlying possibility but an action that never comes to fruition in his constant emotional struggles.

Seeing as how this film doesn't follow the usual stylistic conventions of a typical procedural it also has the distinction of not utilizing well-worn editing methods to communicate the differences in location or plot points. As this is more of a personal tale of our hero (who appears in every scene) than anything else, it is somewhat confusing at times to determine exactly where he has ended up or his relationship to other characters in the somewhat-sprawling plot. Arthur Penn uses no cross fades or other flashy cutting methods. Some scenes instead are framed by Hackman's physical actions of kicking or thrashing in frustration. The audience sometimes feels as if they're experiencing something more than just a movie and instead are getting privileged but brief moments of Harry Moseby uninterrupted. The subtle yet carefully constructed editing techniques place this film in a different more intimate category than most other noir films whose styles reflect the restrained but noticeable bravado of the sleuthing protagonists.
Powerful imagery and a heartbreaking revelation aside, the climax proves to be an expertly staged homage to the crop-dusting sequence in Hitchcock's NORTH BY NORTHWEST (1959) but with no logical explanation concerning the outstanding coincidences and the revealed perpetrator's intangible motivations. The film ends beautifully with stunning symbolism that suggests the circular nature of the consequences with which our protagonist is doomed to suffer for his insistence at getting to the bottom of each truth, which in his case might be better left unexplored. An anecdote told midway through the film reveals that earlier in his life he had stopped just short of getting satisfaction in solving the mystery about his missing father to spare him the pain. It is this refusal to bring closure to a personal demon in his own life that perhaps prompted him to make a career out of bringing other people answers to their own mysteries to provide vicarious satisfaction. But in the end, the missing pieces of the mystery become more frustrating than elusive (see Michael Haneke's CACHE, 2005, as an example of a film that pulls off such an admirable quality.) 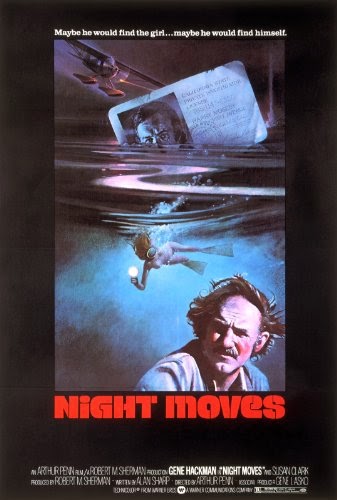 In Arthur Penn’s interesting experiment to kind of cement itself as an anti-noir film, NIGHT MOVES succeeds in differentiating itself with some minor missteps. The film serves to be entertaining and provocative on multiple accounts. It is a forgotten gem and an intimate character study with heartfelt performances. Penn's film deserves to be thoroughly re-examined and hailed as a classic in its own right, no matter what category people choose to classify it as. With such a wide array of genre conventions on display here, it is safe to label this hybrid product as a movie in its own class.

Willy Romano-Pugh is an L.A.-based actor who has acted in short films as well as a number of productions at the Grand Guignol style theater group, Zombie Joe's Underground in North Hollywood. He has always been an avid fan of films, has ambitions to be a filmmaker and is passionate about film criticism.