AN INTERVIEW WITH FRED WILLIAMSON 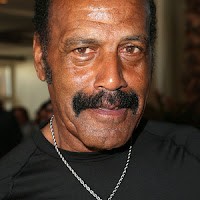 Fred Williamson, aka The Hammer, has been an action icon ever since he burst onto the screens in such '70s exploitation classics as HAMMER (1972), BLACK CAESAR (1973), HELL UP IN HARLEM (1973), THAT MAN BOLT (1973), BOSS NIGGER (1975),  BUCKTOWN (1975) and THE INGLORIOUS BASTARDS (1978). More recently he appeared in films such as FROM DUSK TILL DAWN (1996), ORIGINAL GANGSTAS (1996),  BLACKJACK (1998) and STARSKY AND HUTCH (2004). An ex-professional football player, Williamson is renowned for throwing himself into his action roles, and for his unflappable composure, sex appeal and physical toughness on and off-screen. Now 80 years old, Williamson shows no signs of slowing down, with a new adventure movie, NAZI DOOMSDAY DEVICE (aka ATOMIC EDEN), out now on VOD through Amazon and Vimeo. In the film Williamson is the head of a group of mercenaries out to find a secret weapon created by the Nazis during WWII. I spoke with Williamson about the film and his career. 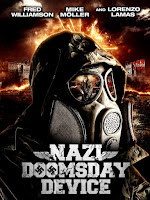 What attracted you the most about your new film NAZI DOOMSDAY DEVICE?
I got involved with the film because I was a friend of the director Nico Sentner. I always try to help fellow actors or directors because I know how hard it is to be noticed in this business. I read the script and saw that the person he wanted me to play was in line with the image I have in all my films. Money wasn’t the motivation since there was none. Helping a friend was my motivation.

What impressed you the most about working with Nico?
Nico is a good director and with more experience he will become a better director.

What was it like working with the cast, which includes Lorenzo Lamas?
Working with the cast was interesting. There were only two or three really professional actors in the film, but they did a good job. It made me work harder to make the film believable. 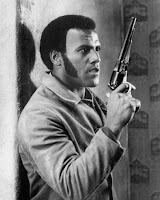 You are now 80 years old, but you look much much younger. What is the secret to staying in such great shape?
What!! You mean I’m 80? There must have been a mistake at the hospital. I feel the same as when I was 30. It must be my black jelly bean diet - not the colored one but the black only. That’s my story and I’m sticking to it.

What did you learn from your career in football that came in useful when you came to Hollywood and began acting?
What I learned from football is that hard work pays off, and also that fans are fickle. Live by your own assessment of yourself not the praise fans lay on you 'cause it can change like the wind.

How easy a transition was it for you when you began acting?
There was no transition I had to make to become an actor, only to learn the trade, as I did to become a football player. The only negative I experienced was the so called big sport stars before me had failed at becoming Hollywood stars and I knew I would be viewed the same way. It was my confidence that came thru to allow them to give me a chance.

Did you look to Jim Brown as an example of how to mold a career?
I never had any conversations with Jim Brown until I had done a tv series (Julia) and the movie M*A*S*H (1970). Being in the right place at the right time, I was at a resturant when someone walked up to me and said. ''Are you the Hammer?'' I said yes. He said ''I’m doing a film. I have a football game in it. Would you put the game together, cast real football players and play a role?'' The film was M*A*S*H and the guy talking to me was Robert Altman.

It's almost thirty years since you acted in the Star Trek episode The Cloud Minders (1969). What is your strongest memory of the experience?
Star Trek happened the same way. I was approached by someone with the same question, and I said yes. They said ''We need someone to beat up Captain Kirk''. I said ''I’m the man''. This happened while I was still playing football.

After you made HAMMER, did you realise that you now had a strong persona that you could capitalise on?
It was not the beginning of my strong persona. That came the day I was born. When the doc held me up and slapped my bottom, I peed on him.

You were one of the kings of the blaxploitation genre in the 70s. Did you feel a responsibility to portray strong role models for black audiences?
My approach to the movies is what I’m talking about. I just played me. I was lucky that fans enjoyed this character, so it was no big stretch for me to portray these cool and tough characters. My approach had a longer span than the other black actors in the 70’s because they fell for the 'Let’s get Whitey' payback movies. In my movies I kicked every one's ass. Black. White. Colored. Pink. Purple. Yellow. If you were the bad guy, you had to go down. Therefore my films did not fit into this so called Blaxploitation era. They tried, but the genre didn’t work. This era only lasted about four years, then it went away. But I didn’t.

What did you best enjoy about working with Larry Cohen on the three pictures (BLACK CAESAR, HELL UP IN HARLEM, ORIGINAL GANGSTAS) you made together?
I learned from Larry Cohen that guerilla film making is a lot of fun.


What inspired you to make the move to directing? What did you learn from some of the directors you worked with?
I started to direct, produce and write for many reasons, but probably the main one being that at that time in the 70’s it was 'Kill the black within 5 minutes of the film, then spend the rest of the story with the white guy avenging his death'. I thought 'Forget my death being avenged. Let me avenge HIS death'. That was not to be, as we had no black heroes at that time, so my goal was to give my fans a hero regardless of the color.

You always threw yourself into your action scenes. Did doing so many action scenes come with any physical cost?
Being physical is part of my being me. 10 years of pro football certainly prepared me for any lumps and bruises I get from making movies. I have no stunt double because all the stuntmen that are black are much smaller than me, so I very happy to do my own stunts and double me. Good fun. 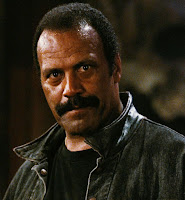 How does it feel to be loved by directors such as Robert Rodriguez and Quentin Tarantino? How was working with them on FROM DUSK TILL DAWN?
Quentin and Rodriguez are both great. You know what makes great directors? The ones that listen to the key actors they hired. Great ideas sometimes come from the actors about their characters. These two guys listen and digest these ideas and sometimes add their own touch which makes it better. That’s how it should work. Making FROM DUSK TILL DAWN was a lot of fun. All that stuff that happens in that movie could never have been written as a script. It was Robert and Quentin's ideas that kept the movie going at its fast pace, along with ideas from the professional cast.

Does it surprise you that your legacy continues to grow?
Everything I approach, I do so with the attitude to be the best, and so far so good.

What other projects do you have coming up?
Next projects are a sequel to ORIGINAL GANGSTAS and I am preparing to shoot an action film in Italy with Enzo Castellari directing. Hopefully it will happen soon but fingers and toes crossed may help.

NAZI DOOMSDAY DEVICE can be rented or purchased on Amazon UK  and Vimeo.