AN INTERVIEW WITH SIMON RUMLEY (PART 2 OF 2) 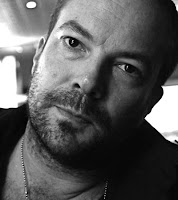 Simon Rumley is a British filmmaker who for nearly two decades now has been making 'extreme dramas' in his own, uncompromising, dark, twisted, experimental style. His credits include THE LIVING AND THE DEAD (2006), RED WHITE & BLUE (2010), 60 SECONDS OF SOLITUDE IN YEAR ZERO (2011), and JOHNNY FRANK GARRETT'S LAST WORD (2016). His latest two films are FASHIONISTA (2016) and CROWHURST (2017), the latter executive produced by Nicolas Roeg and the former dedicated to him and made in his style. FASHIONISTA is a bold, experimental, supremely dark drama that gradually reveals its secrets and becomes more disturbing and poignant. CROWHURST tells the true story of Donald Crowhurst, an amateur sailor who in 1968 entered an around the world  yacht race and was never seen again. In the final part of a two part interview, I spoke with Rumley about the themes and extraordinary qualities of FASHIONISTA and CROWHURST, and where he sees his career heading.

I went into FASHIONISTA blind, and found it extraordinary. In a great way, I never felt settled and sure where the film was heading.
That was kind of the idea. You never quite know what's going on. One thing I was careful to do with FASHIONISTA, which I was able to do because of the structure, was to not give away anything until literally the final few scenes. Even then, I left things deliberately obtuse. I didn't want this to be like a Hollywood film. There are gaps and holes so that when you leave the theater you're not 100% sure what was real or what was just April's imagination.

Structurally, what you pulled off was very impressive, but the non-linear structure also allowed the film to end on a very emotionally powerful note. It was very sad and poignant.
I try to bring an emotional content to everything I do. Most of the stories I tell are quite tragic in their situations and in those situations comes either physical or mental violence or sometimes both. You can watch something like a Tarantino film and it's all about the violence, and I don't mind that per se, but I prefer to focus on the reality of situations and the tragedy of them. I had worked before with Amanda Fuller on RED WHITE AND BLUE and she is a very emotional being, so I knew she would be able to bring out the emotional context of every scene.

Watching FASHIONISTA and CROWHURST back to back I found they could almost be companion pieces about the dangers of being a loner and an obsessive person.
Very much so. People asked me when I was going to make CROWHURST, ''Why do you want to make a film about a guy on a boat?'' For me, it's a very moving tale about the sad demise of a man who really only had himself to blame. He started off the race with lots of positive motivation and energy to spare, but he put himself in an impossible situation where he couldn't quit the race because he had mortgaged his house and business. If you look at most photos of Donald Crowhurst, he looks like a happy man. But the photos of him prior to the race are quite disturbing because you can see how worried he is. He looks like a man who knows that what he is about to do is not for his wellbeing. By this point, he couldn't have pulled out of the race without being seen as a laughing stock and a failure. At least by doing the race he would be seen as someone who had tried his best. By the time he began the race, his debts were almost as much as the prize money. His real tragedy was that, because of his 'British, stiff upper lip' he did not have the ability to confide in his wife or his business manager. I was really interested in exploring the tragic dimensions of the man dramatically.

Would you say you're interested in exploring the irrationality of people?
It's always been a constant source of fasciantion for me how people end up in the situations they end up in. I grew up reading news paragraphs in tabloids and broadsheets that would be about, for example, how a pensioner murdered his wife of thirty years and how the neighbors thought they were a happy couple. They would fascinate me. It would always be about sex and love and infidelity. People are generally not mad. Something just takes over people in certain situations. Or something leads up to it. Our tendency to moralise about such behaviour is wrong, I think.

You're at the point in your career where your budgets are not big enough for your creative freedom to be curtailed by producers or studios. But how do you see yourself going forward? Are you interested in making bigger films?
I've been very lucky in a way in that most of the films I've done have very much been collaborations between me and the producers. We trusted each other and we went into the films wanting to make the same films. We agreed on a script and we shot that script. Inevitably, the producers have a lot of notes in the editing stage but sometimes I have to say I can't do what they want because it will affect the film in a bad way. They've generally been harmonious processes so far. You can do this on independent films as opposed to bigger budget films where you get a lot of different notes from a lot of different producers, distributors and so on, and it becomes filmmaking by committee. That said, I am at the point now where I would like to work with bigger budgets and make bigger films and increase my profile. I've been quietly making movies now for a number of years with a reasonable amount of success. It would be nice for more people to see the films and to get paid more money!

Lower budget films are finding it harder to reach audiences these days. If I make bigger movies perhaps the stories will not be as 'out there' as some of the films I have made, but there are still good stories to tell. My latest film, ONCE UPON A TIME IN LONDON, is a step in that direction. It's a 2 hour 20 minute historical epic set in London from 1936 to 1954. It's my most linear film to date, both in terms of the storytelling and the structure of the edit. I wanted to do somthing as classy and as elegant as THE GODFATHER (1972) or ONCE UPON A TIME IN AMERICA (1984), as opposed to something super violent, sweary and drug-fuelled, which we've seen a lot of in the UK over the last few years.

What is the best film that you have seen recently?
THE KILLING OF A SACRED DEER was great. I came out of a screening of it in Leicester Square and there was a girl saying ''I can't believe someone made that film, and someone financed it. I can't believe we just paid 10 pounds and sat through that. I feel like writing a letter to the filmmaker asking him why he made it. '' I also loved HOUNDS OF LOVE (2016) and DUNKIRK (2017). THE SHAPE OF WATER (2017) was very sweet and had a lot of subtext.

Do you have a favorite modern filmmaker?
I love Darren Aranofsky, although I still haven't seen MOTHER! (2017). David Fincher is a great director. Thematically he's really interesting, and I have liked most of his films, but I find I'm not emotionally tied to his work. Roeg, Jodorowsky and Ken Russell are the ones who have never been bettered though.