AN INTERVIEW WITH SILVIO SAMAC

Silvio Simac is a rising star in the world of martial arts action movies, having appeared opposite Cynthia Rothrock, Benny the Jet, Jet Li, Jason Statham, Keanu Reeves and Scott Adkins. His credits include UNLEASHED (2005), UNDISPUTED 2: LAST MAN STANDING (2006), D.O.A. - DEAD OR ALIVE (2006), TRANSPORTER 3 (2008), MAN OF TAI CHI (2013), and his current release, the fantasy horror KNIGHTS OF THE DAMNED (2017). Simac, Croataian-born but a British citizen, is also a highly proficient martial artist, holding multiple black belts, and on multiple occasions being a British, European and World Champion in Tae Kwon Do. I spoke with Simac about what films inspired him growing up, what drew him to martial arts and what he gets the most out of them, and his experiences making films. 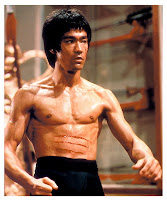 What drew you to the Martial Arts?
Being a 70s child, I was very much inspired by the late Bruce Lee, who made a huge global impact on the silver screen. There is a distinct mysticism about Martial Arts. It's the fusion of Mind, Body and Spirit, Strength in the body, Knowledge in the mind and Honesty in the heart. The latter two are taught and appreciated as we mature into adults but Strength can be appreciated even by a small child as it is coherent with our primal, animal instincts.

What do you get the most out of practicing Martial Arts and the intensive training you do?
Our life is a synergy between us and the environment around us. It is a relationship between energy exchange. The more we give, the more we reap back. In life, we don't always get what we seek, we don't always gain what we strive for. With training discipline there is a direct correlation between the effort we put in and the results we get, so it has always been a healthy outlet for me and I can maintain a healthy body and optimum health. Martial Arts on the other hand encompass a holistic approach to optimum health, merging mind, body and spirit creating balance.

Was it always your dream to start making movies?
As far as I can remember, I was a natural showman and showed a disposition to tell stories.

Was it a learning experience adapting to performing Martial Arts on film?
Indeed, it has been a learning experience. Adapting real combat to an onscreen staged and choreographed action sequence that would capture the audience. Nevertheless, having Martial Arts discipline and focus helped immensely in making this transaction swiftly. As Bruce Lee, said "Flow like water". As a Martial Artist I strive to adapt to a new situation and environment with minimum resistance and full acceptance.

How was your experience working with Jet Li on UNLEASHED?
Having this tremendous opportunity to work with Jet Li along choreographer Yuen Woo-Ping (the action director of the MATRIX films and CROUCHING TIGER, HIDDEN DRAGON) early on in my career, pushed up my bar beyond ever imaginable. Learning from these masters was a turning point in my career in that it motivated me to re-invent myself with an evolved drive, skill and performance as well as creativity.

How about Jason Statham on TRANSPORTER 3? Is he a strong martial artist?
Jason Statham was incredible in learning his moves despite spending very little time at rehearsals. So much so that one of the first questions I asked him was how long he had been practising Martial Arts and to my shock he replied that he had not done any martial arts till this stage. He pulls it off extremely well.

Did you feel Keanu Reeves had a great understanding of martial arts on MAN OF TAI CHI, which he also directed?
Keanu Reeves is an incredibly hard working individual, gives a lot of time to preparation and covers all angles. He picked up a lot of knowledge on martial arts choreography during his shoot of the MATRIX films, but he had a strong 15-20 man stunt choreography team from Hong Kong, led by Yuen Woo-Ping, who were his advisory committee.

Which actors/ martial artists that you have worked with have been the most fun or inspirational?
I always have the most fun working with my friend Scott Adkins. We have worked on five features along side each other, performed countless live shows and seminars, and have been close friends for 17 years, so because we trust one another, we gel quickly and make the action choreography fun, fast, dynamic and spectacular each and every time.

What did you learn the most from working with Yuen Woo-Ping?
His creativity is amazing, although he doesn't leave much of that creativity to the individual artist. But nevertheless, I love his fluidity of dynamics on the screen.

How about Corey Yuen on D.O.A.?
Corey Yuen is a lot more relaxed to work with, and he likes to bring out the best qualities from each individual. Therefore, he is very much open to individual strengths, creativity and freedom of expression.

Which fight scene from your movies are you the most proudest of?
My fight scene against Jet Li in UNLEASHED took the longest time to shoot, and Jet Li said at the time that it was the longest fight scene he had ever done. It took us 3 1/2 weeks to choreograph, rehearse and shoot that fight scene and there was so much to learn from the experience.

What has been the most dangerous scene you have worked on?
I worked in Bollywood (India) alongside the big star Sanjay Dutt. We had a big fight scene on a roof top. It was super scary fighting right on the edge of an 11 storey building and to top it off, I get kicked off the building in the movie. I had to do it three times, in three takes. It was super scary considering that health and safety did not come across as their priority, despite having an air bubble cushioning my high fall, as well as being wired on a rig.

What's the worst injury you have had on a film?
Just minor scratches and bruises.

You have travelled the world making movies and competing in martial arts tournaments. Which countries have you fallen in love with the most?
I have travelled the world through my film career and before that competing. South and North Korea, Argentina, USA, India, Sri Lanka, all over Europe, Russia several times, Thailand, China many times. I was most impressed with Thailand and Thai people. A land of smiling faces, full of beautiful culture, rich history and beautiful food. I loved everything about it during the three month shoot.

What was the experience of making your new film KNIGHTS OF THE DAMNED like?
It was a lot of fun, yet very challenging as the whole movie was shot in merely 3 1/2 weeks. I believe this major obstacle created a super tight and close environment for the cast and crew, having to make the most of the resources we had.

What other films do you have coming out?
The next five months will see the release of three movies I worked on: TRANSIT 17, OUT FOR VENGEANCE and THE DARK KINGDOM.

Have you set yourself any particular goals for the next five years? Where would you like your career to be?
I juggle my life between my film career - directing, producing and acting. I run a successful and growing martial arts association. Lastly and most importantly, I am a father and a husband. I will always strive to have a fine balance between them, always seeking to grow, expand and develop in every field but most importantly look after my loving family and my 3 year old boy. I am in a good place now and intend to continue along the same path although I can see myself getting more into directing and producing.

KNIGHTS OF THE DAMNED is available on DVD and VOD.