AN INTERVIEW WITH DARRYL PONICSAN (PART 3 OF 3)

Darryl Ponicsan is the author of thirteen novels, including his debut, 1970's The Last Detail, which was made as a classic film by Hal Ashby, with Jack Nicholson, Randy Quaid and Otis Young. Ponicsan recently adapted his sequel, 2005's Last Flag Flying, into a new film, directed by Richard Linklater and featuring Steve Carell, Bryan Cranston and Laurence Fishburne. His list of credits as a screenwriter are staggering - Mark Rydell's CINDERELLA LIBERTY (1973), which he adapted from his novel; three films with Harold Becker - TAPS (1981), which featured early appearances from Tom Cruise, Sean Penn and Timothy Hutton, the inspirational sports drama/ romance VISION QUEST (1985) with Matthew Modine and Linda Fiorentino, and the drug drama THE BOOST (1988), with James Woods and Sean Young; Martin Ritt's intense drama NUTS (1987) with Barbra Streisand; Robert Mandel's sports drama SCHOOL TIES (1992), which featured early appearances from Ben Affleck, Matt Damon, Brendan Fraser, and Chris O' Donnell; and Sydney Pollack's romantic drama RANDOM HEARTS (1999) with Harrison Ford and Kristin-Scott Thomas. In the final part of a three-part interview, I spoke with Ponicsan about the female characters in his work, the making of THE BOOST and NUTS, his contributions to RANDOM HEARTS, and the road that led to the novel and film of Last Flag Flying, and what we can expect from the film version.

Part one and two of the interview.

The likes of Nancy Allen in THE LAST DETAIL, Marsha Mason in CINDERELLA LIBERTY and Linda Fiorentino in VISION QUEST are women who have been knocked around by life and have hard edges but still have heart, warmth and spunk. Are you inspired by and attracted to such women?
Yeah, I guess I am. I've never been attracted to privileged women, wealthy women or debutantes. To this day, I'm turned off by the concerns of wealthy women and I think some great women change when they become wealthy. I've always been kind of drawn to girls who have been dealt bad hands in life and managed to somehow prevail.

THE BOOST, which you made with Harold Becker, concerns an L.A. couple (James Woods and Sean Young) in the mid-80s who become addicted to cocaine. Dealing with Hollywood as a screenwriter, did you encounter much drug-related behavior that impacted upon your writing of the script?
I didn't, no, because I never really went to many parties and I've never been one to snort lines of coke at a party when I did go. The people I knew in Hollywood for the most part worked too hard to have a coke habit. The hours you work, especially when you're making a film, are just too long. I never used it myself for pretty much the same reason. My focus is somewhere else, and you can't let anything get in the way. It was ironic that I wrote the screenplay to THE BOOST really. Warren Beatty called me up once to feel me about a project and to talk about THE BOOST. I had never met him previously. During the course of our conversation he said ''Are you clean and sober now?'' I told him that I had always been clean and sober!

Have there been any pitfalls that you have had to try and avoid in your career? How about ego, when your career has been riding particularly high?
I've always been pretty good at controlling my ego. There have been times in my life and career, I'm sure, when I have acted like an asshole and have thought I was hot stuff, but I think for the most part I have come in with a sense of humility and come out with a sense of humility. Finally, screenwriting is hard work and luck and doing the right thing.

How did your acting roles in NUTS and THE BOOST come about?
I actually had a speaking role in THE BOOST. I had a scene with Jimmy Woods, running on the beach. That was fun. Barbra Streisand actually wanted me to play the role of the psychiatrist in NUTS, but the original director, Mark Rydell, was having none of it, and then when another director came on, it had already been cast with Eli Wallach. Martin Ritt, the new director, said ''Why don't you sit at the bar and bark at Barbra when she comes in?'' It was just a little cameo. 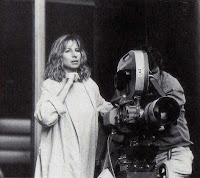 With you and Alvin Sargent originally writing competing drafts for NUTS, and then Barbra Streisand insisting you write as a team, was the film the most 'nuts' you worked on?
It was certainly the strangest experience of my career. Nothing is all bad or good though. There are a lot of memories of that film that I cherish and were good, and then there is the shoddy stuff. It's all yin and yang, it all balances out.

In the end, did you enjoy collaborating with another writer (Alvin Sargent) on the screenplay?
Alvin has been a dear friend for years and years, and still is. He was one of my first friends in the business, and one of my last friends in the business. It was fun to work with him. He has always been in his own world and his way of working is unlike most people's. He takes an awful long time and he's a quietly brilliant writer. He has no ego at all and he suffers from a lack of confidence in his life. I wound up being the drill sergeant of the two of us, the one who had to crack the whip. I loved getting inside Alvin's head. He's a remarkable human being.

What did you find to be the most brilliant thing about working with Streisand?
She surprised me because she had this reputation of being a ballbuster but I found her to be funny, smart, hardworking and just great to hang out with. I really enjoyed my time with her. She's driven, very focused and she is one of these people that lets perfect get in the way of good. I've always had a difficult time with perfectionists. I've always felt it comes out of a sense of insecurity because in truth nothing is perfect and they keep beating themselves over the heads to be perfect. But there's nothing I don't admire about her. She's a wonderful lady.

With RANDOM HEARTS, how different was your original script to the rewritten Sydney Pollack/ Harrison Ford version?
I saw the Harrison Ford film once and didn't like it. I'm sure my script was different but I have a hard time remembering how. I was working with Ivan Reitman and writing for Dustin Hoffman, who was playing a Congressman, and Harrison Ford played a cop in the Sydney Pollack film, which makes it a different kind of picture. Sydney Pollack was a wonderful director and had terrific taste, but unfortunately this was one of his stinkers.

Why did you decide to write a follow-up to The Last Detail (Last Flag Flying) after so much time had passed?
The executive producer of the film of LAST FLAG FLYING, Tom Wright, and I have been friends for a long time, and he was such a fan of THE LAST DETAIL. He kept after me to make a sequel and I kept telling him I didn't want to because it didn't make much sense. But over time, as we got involved in Iraq and these endless wars, and paranoia swept over the country, I couldn't help but start wondering what these characters would be doing now. If they had to somehow duplicate the journey that they did, how and why would they do it, and what would they think about what was going on in the country? I became obsessed with George Bush and Dick Cheney, and the stupid war they led us into, and so once I sat down to write the book, it went real quick.

Was it a cathartic experience revisiting your first success?
It was not only cathartic but it gave me a sense of coming full circle, which was very gratifying. The Last Detail was published in 1970, and the film of Last Flag Flying and the new edition of the book, is coming out in 2017, 47 years later. That in itself is incredible. I'm enjoying this sense of closing the circle.

When you were writing the book was the LAST DETAIL film on your mind a lot?
Oh sure. The movie informed the characters in the book. The characters evolved from the Last Detail book into the film version and then into the Last Flag Flying book and then the film version. It's really a strange process for any writer I would think.

What do you admire the most about Richard Linklater?
I think he's got tremendous heart. He's at peace in his own skin. He knows what he wants out of a film. He's not going to imitate anybody else. I think he trusts the people around him. He's a special guy, and people recognise this. Anytime he releases a film, anybody who knows about movies wants to see it. They're not always great but they're always honest to the filmmaker himself.

Were you disappointed that Jack Nicholson chose not to return?
You know, it's the best thing to ever happen, really. I’m sure it would have been a terrific picture with Nicholson, but we made the movie at what it would have cost to get Nicholson, and then the other two would have wanted equity. It’s economics. At the time it looked like it wasn't going to happen, I had other things, health concerns, on my mind, so it was easy for me to just brush it off. The film happened because Rick never gave up on the project and held on to it. He was off doing BOYHOOD (2014) and other films but he never gave up. Then one day I got an email from him saying ''I told you this day was going to come. Amazon is going to finance the movie. '' I said ''Wow!'' 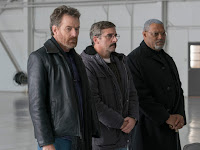 What kind of performance can we expect from Bryan Cranston?
He doesn't do an imitation of Jack Nicholson. He's incredible in his own way. The movie isn't technically a sequel to THE LAST DETAIL. It's an adaptation of a book that continues the story of the book and film of The Last Detail, but it's not actually the same characters. It's similar guys on a similar mission to the original film and book, and the story echoes that book and film.

LAST FLAG FLYING opens in the US on November 3rd.

The trailer to the film.