You have a deep background in music, but when did the passion for filmmaking first come into your life?
My father, Arny Stone, was a film director who worked his way up, and I grew up in and around the film business in New York City, so a job to me meant working in the film business too. As a teenager I worked for a film equipment rental company fixing equipment, and eventually I became a crew member. At the same time, I also got involved in music and started to play in bands in the hardcore punk scene in New York. It was the golden age of music videos during this time, and eventually bands began asking me to direct videos for them. I started doing music documentaries and extreme sports films too.

When did you first come across Michael Alago?
Every time I used to go out in New York, whether it be at a small club or backstage at Madison Square Garden, I kept seeing this same guy over and over again. I would wonder to myself ''Who the fuck is that guy?'' It was only later that someone explained to me ''That's Michael Alago, the guy that found Metallica. '' 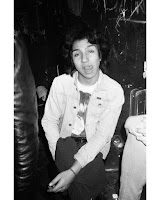 What was your first impression of him? How did you get to know him?
I thought he was a little different and out of place at first. As I got to know him more I picked up on the fact he was a great lover of music, as am I. When he got The Misfits signed to Geffen Records in the mid-90s, I was managing a band called Sub-Zero. I had always been friends with The Misfits, so when I heard they were touring Europe, I asked Jerry Only (the bass guitarist) if Sub-Zero could go on the tour with the band. He said yes. When I went out on the tour with Sub-Zero, Alago was there as well. When bands are out on the road together, they develop a bit of camraderie. I got to know Michael a little bit. When we all got back to New York, I would continue to see him around.

How has your conception of the film changed since that initial idea?
The way I like to make documentaries is to not have everything mapped out or plotted out. I like to learn as I create the film. I feel if I'm finding it interesting and I'm learning as I go, then the viewer will get taken on that same journey. I had an idea of where I wanted the film to go but there was a lot about Michael that I didn't know and I wanted to discover everything as I went. I struggled a little bit against making the film a valentine to Michael, and I think in the end the film has a balance. It's a very revealing film. We go into Michael's previous drug problem and the fact he is HIV Positive. At first Michael had a lot of trepidation with all that, but we made our way through it.

What has the effect been on your career making the film?
Making the film was a big step forward in the evolution of my filmmaking. Being able to interview the guys in Metallica and Cyndi Lauper and Rob Zombie and play with the big boys so to speak was very healthy for me as a filmmaker. As a result, people are starting to look at me differently now. Doing the film has certainly moved things along for me in a certain regard.

What would you like for people to take away from the film?
I'd like people to appreciate how hard Michael had to work to get people to listen to him. He spent years going to shows, getting to know promoters and label executives and musicians, just to cultivate the knowledge to form his credentials and help bring these musicians to the mainstream. In the end I'd like people to see that music transcends all our social constructs. It's universal. It doesn't matter what your sexual preference is or where you're from or what neighborhood you grew up in music brings people together and is an incredibly powerful medium. It's beautiful in a certain way. I mean, there's such a stigma attached to being gay in heavy and hard music and here comes this Hispanic gay guy who breaks down the walls of the genre. I'm not gay myself, but Michael and I connected over our mutual love of music.

In what ways has Michael's story inspired you?
I remember when Michael was drinking and drugging and his life was a bit of a mess. It was a really down moment but Michael really pulled his life together and turned everything around. He's just a good, kind-hearted person these days. I'm proud to call him my friend now. When I met him to talk about the film initially, we were friendly but not close. Now he's a friend of the family, and he talks to my mother even more than I do! When I look back at making the film, my most cherished moments are not meeting Cyndi Lauper or Metallica, it's being in the car with Michael, travelling to the next place and talking about music and having a few laughs. To me that was the real joy of making the film.

What was Michael's response to seeing the film for the first time?
The moral of the story is – Don't make any documentaries about people who are alive! It's not easy! I decided to have him involved all along the way, rather than keep him at a distance and show him the film when it was finished. This was the way my father would do things. I did many rough cuts of the film and showed them to Michael. I wanted him to understand what was needed for each step. I would ask him to open some doors for us and reach out to other people, and tell him what photographs we needed and what music we needed for a certain place in the film. I wanted him to be a part of the process and be excited about it. It worked out really well.

What's very interesting is that no matter how much we learn about Michael in the film he remains an enigma to the end.
He definitely is an enigma, a very interesting character. There are a lot of layers to Michael. What's also nice is that he leads a clean, positive life. He's very inspirational to people and has a lot of love for everybody. This film isn't a tragedy. It's the story of a man who pulls his life together.

What kind of responses did you get when you started submitting the film to festivals?
No festivals wanted to pick up the film, including gay and lesbian film festivals, and other directors who I showed the film to had a lot to say about the film. But in the end, when I showed it to regular people, they fucking loved it. The film is having a life of its own, which is really gratifying as a filmmaker. I'm from a punk rock background and I'm kind of a DIY filmmaker so I don't especially need acceptance from film festivals and accolades to make me feel like I accomplished something. What matters to me is that people outside my window enjoy what I do and take something from it. That's where the currency is for me as a film director. It's about a man who loves music, and people can relate to that.

WHO THE F***K IS THAT GUY? THE FABULOUS JOURNEY OF MICHAEL ALAGO is in selected theaters from July 21st and on VOD and i-Tunes from July 25th.

The trailer for the film.

Email ThisBlogThis!Share to TwitterShare to FacebookShare to Pinterest
Labels: Interview: DREW STONE ON 'WHO THE F**CK IS THAT GUY?'