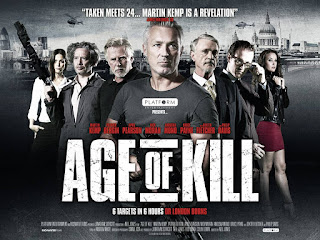 
Martin Kemp (ex-Spandau Ballet, regular on UK TV's 'EastEnders', Reggie Kray in THE KRAYS, 1990) plays Sam Blake, a top-notch black-ops sniper who is blackmailed by a mysterious villain into killing six seemingly random victims in six hours or risk the death of his daughter (Dani Dyer, daughter of Danny Dyer). Thrown into the mix too is hooker Lexi (a spunky and sexy April Pearson from UK TV's 'Skins'), and political intrigue akin to SKYFALL (2012).


Everyone in the cast is game, and indeed, one of the pleasures in watching AGE OF KILL is enjoying the cast assembled for the picture, which includes quite a few British actors who have had memorable successes in Hollywood or British action/ crime films. Martin Kemp was a member of New wave pop act Spandau Ballet and is an EastEnder, but he was also one half of THE KRAYS with his brother Gary Kemp (also a fellow Spandau bandmate). AGE OF KILL is a reminder of his talents as an actor. He exhibits charisma and a hard edge here, and delivers the chops in the action scenes. 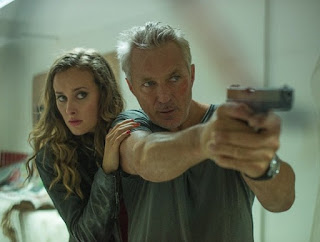 Patrick Bergin was the villain in SLEEPING WITH THE ENEMY (1991) and PATRIOT GAMES (1992), and played ROBIN HOOD (1991). Bergin always had a dark, malevolent but mischievous edge and he does here in his 'M' role. Bruce Payne played Wesley Snipes' nemesis in PASSENGER 57 (1992), and appeared previously in VENDETTA, as well as fantasy films like DUNGEONS AND DRAGONS (2000) and HIGHLANDER: ENDGAME (2000). Here he is on less villainous form as the Prime Minister.

AGE OF KILL is a fast-moving, no-nonsense, tightly-coiled thriller in the style of Jonathan Solcott's other productions WE STILL KILL THE OLD WAY (2014, which was co-produced by Neil Jones) and VENDETTA (2013). If anything, the film could've been longer. Neil Jones makes his low budget go far, giving the film a vivid, international look, even though the film is resolutely British in an endearing way, avoiding the mistake of being faux-Hollywood. The film is genuinely tense and gripping, and is admirably contained, not straining to be an epic. Like Martin Kemp's conflicted, dark hero, the film has some surprises up its sleeve, even whilst it plays to formula.

AGE OF KILL is playing in select UK cinemas currently. The film will be released on Blu-ray and DVD in the UK on 15th June 2015.
Posted by Paul Rowlands

Email ThisBlogThis!Share to TwitterShare to FacebookShare to Pinterest
Labels: Review: AGE OF KILL