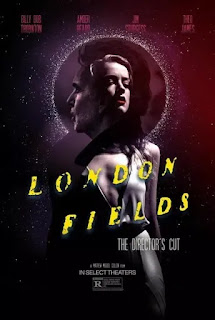 LONDON FIELDS, an adaptation of the celebrated 1989 Martin Amis novel, has had a long road to the screen and unfortunately,  after missed festival screenings and release dates and bitter fighting between Cullen and the producers, was released in a compromised version that did not reflect director Mathew Cullen's intentions for the movie. The director’s cut, lo and behold, is a much more successful version of the film. This is an artistic endeavour audiences are going to have strong opinions about, either in a positive or negative way, but aren't these kinds of projects the most fascinating, especially in the current, sanitised PC culture?

The story is set in a future London nearing some kind of collapse. Amber Heard (AQUAMAN, DRIVE ANGRY) plays Nicola Six, a woman whose clairvoyant powers have allowed her to see when, where and how she will be murdered, but not by whom. Enter Billy Bob Thornton as terminally ill novelist Samson Young, who has moved into the abode of his rival Mark Asprey (Jason Isaacs) with the notion of completing a final book but is bereft of inspiration. He and Nicola decide to join forces to find out who her murderer will be: he’ll get a great final novel that will restore his legacy and she’ll be able to prepare for her fate. The likely culprits soon make themselves known and couldn’t be any different: obnoxious, sex-obsessed, working-class yobbo Keith Talent (Jim Sturgess), whose dream in life is to be a darts champion, and moneyed, upper-class, ridiculously handsome and unhappily married Guy Clinch (Theo James). 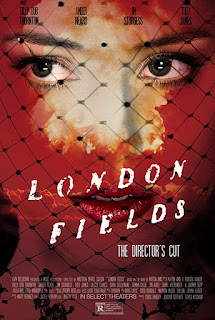 LONDON FIELDS is a bold, experimental and audacious movie that is truly ambitious. It recalls Richard Kelly’s similarly polarizing SOUTHLAND TALES (2006) in its mixing of tones, genres and kinds of humor, and in its apocalyptic setting. The film frequently overloads on such imagery, giving the film a frenetic, fractured and startling feel reminiscent of U2’s Zoo TV. Guillermo Navarro’s photography is beautifully rich in its color and also noir-style touches. The soundtrack by ToyDrum is evocative and exciting.

Amber Heard is a great, bewitching femme fatale in the movie and goes all out with her performance. She’s one of the most beautiful and sexy actresses currently working, yes, but she’s also one of the most underrated. Billy Bob Thornton is of course pure class, delivering a nuanced performance that always subtly reminds of us of the pain his character is always enduring. Theo James has a persona and appearance reminiscent of Hugh Grant and Rupert Everett. Jim Sturgess’s performance is so over the top that some viewers will hate it. It's quite hilarious and ballsy, and the role and the film in general is another feather in Sturgess’s cap for challenging, off the wall choices. Johnny Depp has a quite substantial, unbilled role as Sturgess’s gangster associate and darts rival Chick Purchase, which is the best character name of 2018 without a doubt. Typically, Depp is fantastic fun as his bizarro character. Cara Delevingne has fun playing down her looks to the nth degree as Sturgess’s wife.

I’m a fan of balls-out, go for broke, punch above your weight, die trying cinema, and the director's cut of LONDON FIELDS is a beautiful looking and sounding movie, with an impressive and very daring and sexual performance from Heard, some accomplished and some off the wall acting turns from the supporting cast, an intriguing setting and premise, and a tone and narrative that gives the film a unique identity all of its own. Granted, Cullen has tried to bite off more than he can chew. He was TOO ambitious. There’s too much going on for the film to be totally successful. He hasn’t made it easy on his audience, or himself. But one has to admire that level of passion, ambition and sheer balls. Viewers will be talking about how much they loved, hated, kind of liked or were indifferent about this definitive cut of LONDON FIELDS for many years to come, and that is not the mark of a forgettable movie. It’s the mark of a film that shot for the moon.