PACING THE CAGE - A Review

PACING THE CAGE is the feature directing debut of former sports photographer E.B. Hughes. It's a miniature character portrait of a middle-aged man opening up to love and trying to overcome his addictions, demons and criminal past. It tells the story of ex-con Max Lyons (Denny Bess), who upon returning to 'normal' society is faced with an unpaid debt to a vicious gangster (Mark Borkowski), a heroin habit and and depressing employment prospects. Max must somehow find a way to start again and get off the road that put him in prison.


Hughes favours very naturalistic performances that open up the awkwardness of human interactions. Denny Bess creates a vividly soulful, sweet but palpably tough character that makes the audience invest in his story. Mark Borkowski is chilling as the livewire, unpredictable gangster Lucius Jones. The first part of the film is very low-key and intimate, but upon Borkowski's arrival, the rest of the film has a palpable tension even when Borkowski isn't in a scene. Hughes is also good with female actors, drawing a very real performance out of Reyna Kahan, whose performance as the sensitive, vulnerable Sara, Max's new love, is a standout.

The film successfully balances tones: it's a human, sometimes humorous story with a lot of heart, and a brutal, gritty crime thriller, but it also has both a strong male and female personality to itself that makes the film a rich viewing experience. It also has a restless street energy and a palpable  feel to its New Jersey and New York locations. One can see the influences of filmmakers such as John Cassavettes or Jerry Schatzberg in the freewheeling, edgy but humanistic style, and films such as STRAIGHT TIME (1977) in the basic story, but it overcomes its influences to become a film very much its own.  The film is refreshingly unpredictable, never quite going where you expect it to, and each scene brings a new flavour and teaches you new things about the characters. Some of the performances may lack polish, and the film is engrossing enough that at only 75 minutes it feels short, but there's emotional honesty, heart and care in this piece of work that signifies E.B. Hughes as a talent to watch. 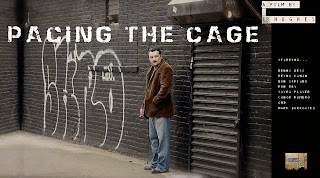 Paul Rowlands is a Japan-based writer. After completing a BA Humanities course (majoring in English and Science) at the University of Chester, he moved to Japan in 1999. He writes for the James Bond magazine, Kiss Kiss Bang Bang, has had articles published on Press Play and has had an almost lifelong obsession with cinema, something the advent of DVD only increased. Paul is also a writer of so far unpublished short stories and novels, and is planning his first short film.
Posted by Paul Rowlands

Email ThisBlogThis!Share to TwitterShare to FacebookShare to Pinterest
Labels: Review: PACING THE CAGE